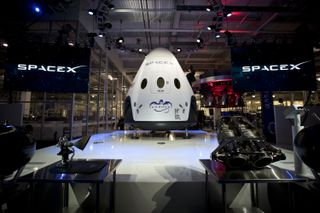 The SpaceX crewed Dragon spacecraft is being designed to carry humans to the International Space Station and beyond. A new report from the Government Accountability Office warns that both SpaceX and Boeing may not be able to make their first crew launches by 2019.
(Image: © SpaceX)

NASA intends to put a backup plan in place in the event that SpaceX and Boeing are not ready to fly humans to space in 2019, according to a new report from the Government Accountability Office (GAO).

SpaceX and Boeing are both building crew transportation systems for NASA, as part of the agency's Commercial Crew Program (CCP). Those multibillion-dollar contracts were awarded in 2014, and initial estimates suggested the companies could be flying astronauts to and from the International Space Station (ISS) as early as 2017.

Right now, SpaceX and Boeing are both scheduled to have their crew transportation systems undergo a safety certification process in the latter half of 2018. But the GAO report, released Thursday (Feb. 16), outlined numerous reasons why the two companies may not be able to meet that current schedule. The report goes on to recommend that NASA take steps to have an alternative means of transporting humans to the ISS in 2019, which the agency has agreed to. [SpaceX Crew Dragon Spaceship for Astronauts in Photos]

Since the retirement of the space shuttle, NASA has relied on Russia's Soyuz spacecraft to get astronauts to and from the space station, at about $70 million per seat. In an effort to bring human spaceflight capabilities back to the U.S., the agency started the CCP, awarding its first round of contracts in 2014, and a second round in 2015.

"If NASA needs to purchase additional seats from Russia, the contracting process typically takes 3 years," GAO officials wrote in the report summary. "Without a viable contingency option for ensuring uninterrupted access to the ISS in the event of further Commercial Crew delays, NASA risks not being able to maximize the return on its multibillion dollar investment in the space station."

For its crew transportation system, SpaceX plans to use its Falcon 9 rocket and a version of the company's Dragon spacecraft updated to support human passengers. SpaceX was initially scheduled to undergo a certification review in the second quarter of 2017; this step is now slated to occur in the third quarter of 2018, according to the GAO report.

Boeing will send humans to space inside its CST-100 spacecraft, launched atop an Atlas V rocket (built by United Launch Alliance). Boeing's crew transport system was scheduled to undergo a safety certification review in the third quarter of 2017, but that review is now scheduled for the fourth quarter of 2018.

If the companies meet those current deadlines, they could begin test flights in 2018 and be ready to fly NASA astronauts to the station in 2019.

"Both of the Commercial Crew Program’s contractors have made progress developing their crew transportation systems, but both also have aggressive development schedules that are increasingly under pressure," GAO officials wrote in the report summary. The report goes on to outline specific obstacles that could lead to delays in the two crew transport systems achieving certification in 2018.

"Given the delays in the Commercial Crew Program, GAO recommends that NASA develop and report to Congress on its contingency plans for maintaining a U.S. presence on the ISS beyond 2018," according to the summary. "NASA concurred with the recommendation and intends to develop a contingency plan."