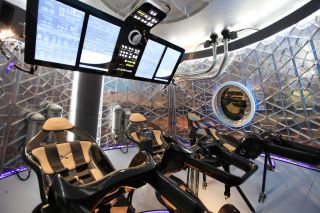 The inside of SpaceX's Dragon V2, designed to take seven crewmembers to space.
(Image: © NASA/Dimitri Gerondidakis)

Two American spaceflight companies are quietly competing in a space race for the new era.

SpaceX and Boeing are vying to become the first private firms to fly astronauts to the International Space Station for NASA sometime in 2017. NASA chose both companies as part of the agency's commercial crew program, which may effectively end NASA's current sole reliance on Russian vehicles to get astronauts to and from the orbiting outpost.

NASA has purchased expensive seats for astronauts aboard Russian Soyuz spacecraft since the end of the space shuttle program in 2011, but hitching rides on SpaceX's manned Dragon capsule and Boeing's CST-100 spacecraft could make spaceflight significantly cheaper for the space agency. Officials with both SpaceX and Boeing think seats on their launch systems will be cheaper than the approximately $70 million price tag of a ride on a Soyuz. [SpaceX's Dragon V2 Explained (Infographic)]

"I don't ever want to have to write another check to Roscosmos [Russia's space agency]," NASA Administrator Charles Bolden said during a news conference this week.

Both companies are currently moving toward launching in 2017. At the moment, Boeing is targeting the end of 2017 for its first crewed flight to the station, but SpaceX might make it there before then, depending on how test flights in 2016 go.

"When we have both of these flags on the ground with their crews safely returned, we'll all be winners," Kathryn Lueders, manager of NASA's Commercial Crew Program, said in a statement.

NASA is providing SpaceX and Boeing with funds to develop the crewed Dragon and CST-100 spacecraft. SpaceX will receive $2.6 billion of the $6.8 billion total in the contract, and Boeing will get $4.2 billion. Bolden is also confident that the Commercial Crew Program will continue to receive support from Congress in the next round of budget approvals.

SpaceX is planning to perform the first abort system test — designed to get astronauts out of harm's way should something go wrong during a crewed launch — this year, with another abort test expected later in 2015. In 2016, the spaceflight company is expected to launch an uncrewed Dragon to the space station atop the company's Falcon 9 rocket. SpaceX representatives hope to launch a crewed mission shortly after that, in 2017.

Boeing is planning on launching its uncrewed and first crewed missions to the space station in 2017. A Boeing pilot and NASA astronaut will be aboard for the first flight, John Elbon, vice president and general manager of Boeing Space Exploration, said during the news conference.

Once it starts flying, the Commercial Crew Program will actually make the space station more productive, NASA officials have said. Both Dragon and CST-100 are designed to carry seven space flyers to orbit, which means that the station will play host to seven productive crewmembers instead of six.

"It's a great time to be a part of the American space program, which is on its way to Mars," NASA astronaut Mike Fincke said. "There's not another group on this planet, or off this planet, that wants the success of the Commercial Crew Program more than we do."