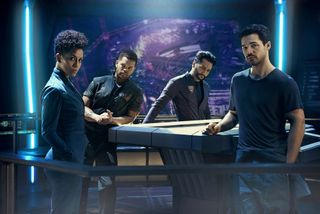 The crew of the ship Rocinante from Syfy's space opera "The Expanse," whose second season starts Feb. 1.
(Image: © Kurt Iswarienko/Syfy)

Season 2 of the high-flying "Expanse" TV show is coming soon, and Space.com can't wait — so we caught up with the book's authors, who are also deeply involved with the new show, about what to expect when it returns Feb. 1.

Earlier, we talked with authors Daniel Abraham and Ty Franck — who use the pen name James S.A. Corey — about the newest book in the "Expanse" series. Here, we got the details about how the show's newest season will measure up.

The show's second season expands the scope of the first, its creators have said. There are more complicated interactions among the three main solar system factions: Earth, Mars and groups in the Asteroid Belt (mainly the Outer Planets Alliance) as well as deeper interactions among the crew of the Rocinante. And that scope will also come with an increase in length — there are 13 episodes this season, compared to last season's 10 — and physical space. [Turning a Sci-Fi Series into a TV Epic: Q&A with 'The Expanse' Authors]

"The sets they came up with for Season 2 are astounding," Abraham said. "I walked into some of the things that they built for Season 2, and it was like nothing I have ever seen before — it was awesome."

Abraham called out the Tycho space station in particular, which is serving as Outer Planets Alliance headquarters at the start of the second season, as a particularly cool locale that's given a closer look during the upcoming season.

"I think that [Tycho's operations center] is the biggest set we've ever built," Franck added. "It looks like the Kennedy Space Center. You could launch space shuttles in there."

They also mentioned the Martian soldier Bobbi Draper's warship — which Franck told the production team to make look like "a flying threat" — as another striking Season 2 set piece.

Draper herself, whom fans of the book have been very excited to meet, will make her first appearance at the beginning of Season 2, as well.

"Bobbi is awesome, and Frankie [Adams, the actress playing her] is awesome," Abraham said. "I am in a constant struggle not to just be smug about Frankie Adams in this."

Another major new character, Prax (played by Terry Chen), is also getting the duo excited because of the actor's "fascinating and lovely" take on the botanist.

"He was a really interesting choice, because if you look at his CV up until now, mostly he's been playing tough guys," Abraham said. "And then he comes in as this very vulnerable, very, very thoughtful, very cerebral character and he just owned it."

"I think I heard somebody describe him as 'intensely gentle,' which is a weird mixture, but it absolutely describes what he is doing" Franck said.

With regard to the main Rocinante crew, although the authors couldn't offer details, they stressed that the foursome would all grow and develop as characters.

"The thing that I liked the most [is how] the characters grow and change and become clearer and more accessible to the audience in ways that are really peculiar to the show," Abraham said. For instance, Alex and Amos have a mini-arc between them that is unique to the TV series, but would have fit in the books, he said.

In another example, a very minor book character plays a large role in the series' second season. That character "winds up being an opportunity to really compare and contrast with some of the crewmembers, in ways that I thought were fascinating and enlightening," Abraham said. "Getting to remix it a little bit like that so that they can play off each other was really awesome."

Abraham and Franck talked about the pleasure they've taken in the way that the world of the books and show have become more mainstream. For instance, Tycho Station was featured on the cover of Physics Today in December. Abraham said that it was the first time that the magazine had featured something from science fiction on the cover since 1974, and that he was "flattered as hell," since the authors and show's writing team spend a lot of time working to develop the science of the "Expanse" solar system.

"We are a pretty nerdy writers' room," Frank said. ("We apologize for nothing," Abraham quipped.)

The duo mentioned that there would be some cool projects ahead to tie into the TV season and the books, but they couldn't yet clarify what that might entail — though they did have an unrelated proposal.

"The thing that it isn't, but that I would love, is a coffee machine," Abraham said. "I would love a dedicated espresso machine in the style of the Rocinante. We haven't had any interest in that one yet — but if the guys at Keurig want to talk to us about that, I would be happy to have the conversation."