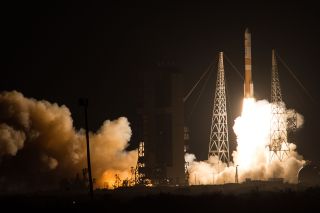 The U.S. Air Force has launched the newest member of the military's core communications-satellite constellation.

The Wideband Global SATCOM-8 spacecraft, or WGS-8, lifted off atop a United Launch Alliance (ULA) Delta IV Medium rocket today (Dec. 7) at 6:53 p.m. EST (2353 GMT) from Cape Canaveral Air Force Station in Florida. The Delta IV deployed the satellite as planned at 7:35 p.m. EST (0035 GMT on Dec. 8), as the duo were flying over Madagascar, ULA representatives said. You can see more launch photos for WGS-8 here.

As its name suggests, the $425 million WGS-8 satellite is the eighth member of the WGS constellation to reach orbit. The network, which will eventually consist of 10 spacecraft, is "the backbone of the U.S. military's global satellite communications," Air Force officials have said.

Those international partners are Australia, Canada, Denmark, Luxembourg, the Netherlands and New Zealand.

The WGS satellites, built by Boeing, set up shop in geostationary orbit about 22,300 miles (35,890 kilometers) above Earth's surface, where their orbital velocity matches the planet's rotational speed. The spacecraft therefore hover over the same patch of the planet 24 hours a day — a favored orbit for communications satellites, because it allows them to stay in constant contact with equipment on the ground below.