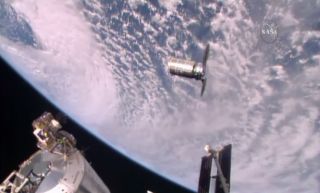 A Cygnus cargo spacecraft arrived at the International Space Station on Sunday (Oct. 23), delivering science experiments and supplies for the station's six-person crew.

The Cygnus spacecraft was captured by the station's robotic arm at 7:28 a.m. EDT (1128 GMT) in order to be attached to an open berthing port later this morning The cargo ship is delivering more than 5,100 lbs. (2,300 kilograms) of supplies and science gear to the station. The ship is named the S.S. Alan Poindexter in honor other of the late NASA astronaut Alan Poindexter, who died in 2012.

Built by the aerospace company Orbital ATK, Cygnus spacecraft are not designed to independently dock with the station. Instead, astronauts and ground crew must use the station's robotic arm to grab the spacecraft and berth it with the station. Japanese astronaut Takuya Onishi used the 57.7-foot-long (17.6 meters) Canadarm2 to grab Cyngus on Sunday morning, with American astronaut Kate Rubins backing him up. Later today, flight controllers at NASA's Mission Control center in Houston will remotely control the arm to install Cygnus on the Unity module, where it will remain for about one month.  [Photos: Cygnus Launches Into Orbit on Antares Rocket]

Cygnus was launched atop an Antares rocket, also built by Orbital ATK. This was the first Antares launch in nearly two years; in 2014, an Antares rocket (which was also carrying a Cygnus craft to the station) exploded seconds after liftoff. Sunday's launch was not only a return to flight for Antares, but also the first flight of the upgraded Antares 230, which has two new engines in its first stage.

The Cygnus launch was pushed back repeatedly, and even though the spacecraft left Earth ahead of the crewed Soyuz vehicle, "mission managers decided to let the Cygnus take its time on orbit and let the new crewmembers arrive first," NASA officials said in a statement.