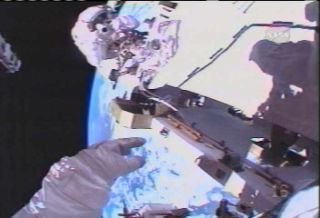 This view from the helmet camera of astronaut Michael Lopez-Alegria shows his spacewalking partner Sunita Williams as she takes a photograph in a Feb. 8, 2007 spacewalk.
(Image: © NASA TV.)

The veteran astronaut and International SpaceStation (ISS) commander [image]broke the American cumulative spacewalking record Thursday during the thirdin a series of assembly-themed sessions for his Expedition 14 crew[videopreview].

“It’s a nice dayoutside,” Lopez-Alegria said near the spacewalk’s end. “Do Ihave to go in?”

Lopez-Alegria spent six hours and 40minutes working outside the ISS with Expedition14 flight engineer SunitaWilliams, who herself holdsthe record for the most spacewalking time by a female astronaut [image].

Highlighting their orbitalwork was the jettison of two, 18-pound (eight-kilogram) thermal shrouds,each larger than a king-size bed sheet and bundled into a lumpy garbagecan-sized mass [image].The shrouds were no longer needed, with NASA flight controllers concerned thatthe equipment they blanketed on the station’s Port 3 maintruss segment could overheat if the covers remained in place, missionmanagers said.

“I don't think I could do it better than that,” Lopez-Alegria said after carefully tossingthe shrouds aft, below and slightly to starboard of the ISS on a path thatwould not prove a future debris threat for the station. “On behalf of all the crewmembers who have trained forthis task, I say good riddance to those XPOP shrouds."

"Very nice,"Williams said after the first shroud flew overboard on track. "I thinkthat was pretty sweet."

Mission managers said theypicked the shrouds’ trajectories carefully to ensure they burn up inabout 20 days or so and pose to return or impact risk to the ISS.

But it was at 12:16 p.m.EST (1716 GMT) -- the three hour, 50 minute mark of today’s excursionprecisely -- when Lopez-Alegria surpassed NASA astronaut Jerry Ross to snag theU.S. spacewalking title with a total of 61 hours and 22 minutes of spacesuit-edwork [image].Ross logged 58 hours and 32 minutes during nine spacewalks and sevenspaceflights, and topped the U.S.spacewalker list since 2002 until today.

“If we made it lookeasy or otherwise, it was thanks to a lot of people on the ground,”Lopez-Alegria said as he thanked a long list of astronaut trainers, staff,engineers and flight controllers.

Thursday’s ISSassembly work marks the end of a three-part series of U.S. spacewalksthat have been strewn with new records. The Expedition 14 crew’s Jan. 31,Feb.4, and Feb. 8 spacewalks with another planned for Feb. 22.

“We’ve neverexecuted more than a single EVA at one time in a stage, meaning between shuttlemissions,” said Glenda Laws, NASA’s lead station spacewalk officer,adding that a record five ISS spacewalks will be performed during theExpedition 14 mission.

Derek Hassmann, said the crew’sperseverance throughout the packed spacewalk schedule not only moved the ISSassembly process forward, but paves the way for future station assembly plans.

“They met all myexpectations and more,” Hassman said of theExpedition 14 crew. “The series of EVAs, I think,have shown that we have an important new capability on the station.”

Lopez-Alegriawill have a chance to stretch his U.S. spacewalk lead on Feb. 22during a Russian extravehicular activity (EVA) -- to be his 10thtrip outside a spacecraft in orbit -- with Expedition 14 flight engineer MikhailTyurin to free a stuck cargo ship antenna.

But the NASA astronaut has long wayto go to catch up to cosmonaut Anatoly Solovyov, who currently owns theworld’s spacewalking title with 16 spacewalks, 82 hours and 22 minutes ofspacesuit-ed work under his belt, space agency officials said.

At 29 hours and 17 minutes and fourcareer EVAs, Williams continues to lengthen her leadas the top female spacewalker, a mantle she won during Sunday’sspacewalk.

Thursday’sspacewalk began about a half-hour earlier than planned at 8:26 a.m. EST (1326GMT), with Lopez-Alegria and Williams ahead or on schedule during their orbitalwork.

In addition to removing and tossingout the unneeded thermal shrouds and some smaller covers, the spacewalkers alsodeployed one of two foundation points for a future cargo carrier for ISS spareparts and loosed a set of latches on the recentlyinstalled Port 5 segment at the leftmost edge of the station's main truss.

The latter task primes the Port 5truss [video]for the relocation of the station’s older Port 6 solar array truss, whichcurrently rises like a mast near the orbital laboratory’s midpoint. The Port6 truss will be hauled to the end of Port 5, its final location, during aplanned Septembershuttle flight by NASA.

Lopez-Alegria, for hispart, was eager to remind himself of his surroundings while working outside hisspacecraft Thursday.

“When you get a chance, take alook long the solar array, it’s a beautiful view,” Lopez-Alegriatold Williams as a blue Earth backlitboth astronauts at their perch on the station’s portside edge. “Ifeel like I’m water skiing behind some huge boat, dragging my feet in thewater.”