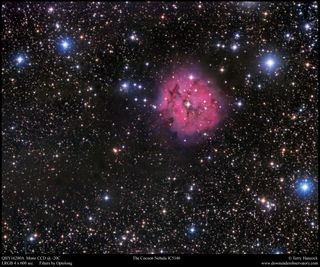 Located 4,000 light-years from Earth in the constellation Cygnus, the Cocoon Nebula is surrounded by a bright-red, glowing cloud of hydrogen gas.
(Image: © Terry Hancock)

After a massive star dies, the energy ejected from the colossal explosion forms what is known as a nebula — a ginormous, colorful interstellar cloud of gas and dust. Two new images captured by astrophotographers highlight the intense beauty of cosmic nebulas.

Nebulas form in a variety of shapes and sizes. Known nebulas have been said to resemble a horse's head, a butterfly, a cat's eye and an eagle. An estimated 10,000 nebulas are thought to exist in the Milky Way — the galaxy that contains our own solar system — but only about 1,500 have actually been detected.

Another beautiful nebula is the Cocoon Nebula, located 4,000 light-years from Earth in the constellation Cygnus, and captured in a new image by astrophotographer Terry Hancock. The photo shows the glowing red cloud of gas and dust surrounding the central star, which sustains the nebula's life. [Spectacular Photos of Nebulas in Deep Space]

A much smaller emission nebula, Sh2-65, can be seen in a photograph taken by photographer Ron Brecher. Sh2-65, which glows faint red in the image, is located in the constellation Aquila, about 10,700 light-years from Earth.

"The few images I was able to find [of Sh2-65] tend to show only the brightest part of the nebula — the diagonal 'bar' along the right edge," Brecher told Space.com in an email. "In addition to the bar and fainter surrounding hydrogen emissions in red, my image also shows faintly glowing, patchy dust surrounding this nebula, which is reflecting starlight off of dust particles."

Another famous nebula is the Crab Nebula, one of the most studied objects in space, which was recently photographed by the Hubble Space Telescope. The detailed new images released by NASA revealed the "beating heart," or central neutron star, that pulsates at the core of the Crab Nebula, which resides in the constellation Taurus.