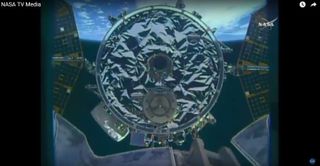 Assisted by British astronaut Tim Peake, American astronaut and space station Cmdr. Tim Kopra grappled the craft with the space station's robotic arm at about 6:51 EDT (1051 GMT) this morning, and the crew will soon begin the long process of transferring nearly 7,500 lbs. (3,400 kilograms) of supplies off of the privately owned craft.

The Cygnus spacecraft is named after NASA astronaut Col. Rick Husband, the commander of space shuttle Columbia (STS-107), which broke apart on reeentry in 2003. Kopra paid tribute to Husband shortly after capturing the craft.

"Houston we'd also like to say that we're really honored to bring aboard the SS Rick Husband to the International Space Station," Kopra said. "It recognizes a personal hero to so many of us, and this will be the first Cygnus honoree who was directly involved with the construction of this great station."

The Cygnus spacecraft launched March 22 on an Atlas V rocket built by United Launch Alliance (ULA). It marks the most cargo ever carried by a Cygnus spacecraft, and is the last in Orbital ATK's current cargo delivery contract with NASA in which the company will launch a Cygnus craft on a rocket built by ULA. (Orbital ATK will use its own Antares rocket to complete the remaining cargo shipments.) [Blastoff! Orbital ATK CRS-6 Mission Launches to Space Station (Video)]

The massive experimental payload includes a camera to investigate meteor showers hitting Earth; a series of samples to test the microgravity movement of the soil-like compound covering asteroids, called regolith; sticky Gecko Gripper pads; and a permanent 3D printer for the station.

In addition, one experiment will stay on the craft while it's docked to the station, and will only be activated once it's filled with trash and released from the space station in May. That experiment, called Saffire-1, will kindle a large-scale fire in a special box to measure how fire grows and spreads in microgravity. On its way out, the spacecraft will also release five minisatellites into orbit.

Soon, the station's U.S. Laboratory Module will be looking much busier:

The current crew — which includes Kopra and Peake, NASA astronaut Jeff Williams, and Russian cosmonauts Yuri Malenchenko, Alexey Ovchinin and Oleg Skripochka — will see a lot of traffic to the station in the next few weeks. Next week, a Russian Progress supply craft will leave the station, NASA officials said, and a new one is scheduled to arrive on April 2. Later in April, SpaceX is scheduled to send a supply spacecraft to the station. The craft will be docked simultaneously with the Cygnus capsule. SpaceX's delivery will include an inflatable habitat that will add an experimental extra room to the station.

Editor's Note: An earlier edition of this article failed to mention that NASA astronaut Jeff Williams is also currently onboard the ISS.