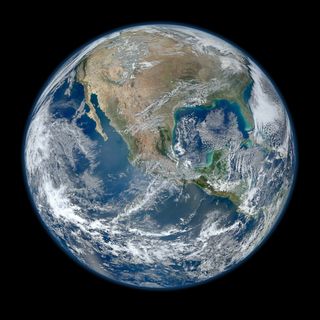 A view of Earth from space as seen by NASA's NPP Suomi satellite as seen in January 2012.
(Image: © NASA/NOAA/GSFC/Suomi NPP/VIIRS/Norman Kuring)

Just in time for changing seasons, the online community observatory Slooh will host a live view of the sun and discuss the aurora borealis today (March 19) in a webcast celebrating the earliest northern spring since 1896.

Starting at 5 p.m. EDT Saturday, March 19, Slooh and The Old Farmer's Almanac will provide views from the Prescott Observatory in Arizona and the "spectacle of the aurora borealis from northern latitudes," Slooh representatives wrote in a statement. You can watch the webcast live on Slooh.The webcast will also visible at Space.com, courtesy of Slooh.

"Thanks to some Leap Day weirdness this year, we're in for the earliest arrival of spring since 1896," said Slooh astronomer Paul Cox in the same statement.

"Vernal equinox usually occurs on March 21st, but this year, depending on your time zone, it falls on March 19 or 20. That's great for those of us in the Northern Hemisphere, but it also marks an early start to winter for those in the Southern Hemisphere."

The show will feature Slooh astronomers Paul Cox and Bob Berman discussing the historical and cultural significance of the vernal equinox, which happens when day and night are at approximately equal lengths around the world. (In the Northern Hemisphere, this happens on the first day of spring and first day of fall.)

They will be joined by guest Mare-Anne Jarvela, senior editor of The Old Farmer's Almanac, who will provide information on gardening and folklore. Viewers can join in by tweeting @Slooh during the broadcast.

"Slooh's mission is to bring a global community together to celebrate this moment as humans have done since antiquity, to mark the change of the seasons," Slooh founder and CEO Michael Paolucci in a statement.

"We are honored to co-host with the venerable Old Farmer's Almanac, North America’s most popular periodical and oldest published almanac, or 'calendar of the heavens.'"