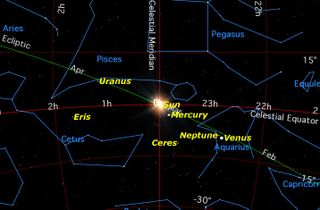 On Sunday, March 20, half an hour past midnight EDT, the sun crosses the celestial equator moving north, ushering in spring in the Northern Hemisphere, autumn in the Southern Hemisphere.
(Image: © Starry Night Software)

As the Earth makes its annual trek around the sun, certain events are of special importance, both to astronomers and to the public at large. Arguably the most important of these events is the equinox, which occurs this Sunday, March 20, at half an hour past midnight Eastern Daylight Time.

Because of the tilt of the Earth's axis, the sun appears south of the celestial equator for half the year, and north of the equator for the other half. The points of transition from one hemisphere to the other have been extremely important since the beginning of recorded history. If fact, some of the earliest recorded events are astronomical observations of the sun's position.

One of the remarkable things that the first astronomers observed was the position of the sun among the stars. That knowledge is surprising, because no one can see the sun against the starry background, except on the rare occasions when there is a solar eclipse. Yet the earliest astronomers knew that, on the date of equinox, the sun was in the constellation Aries, even though Aries itself would not be visible until a couple of months later.

These ancient scientists made this discovery through careful observations of stars in evening and morning twilight. [The Best Night-Sky Events of 2016: What to Watch for This Year]

Nowadays, skywatchers have computer software like Starry Night, which enables viewers to easily see the sun and stars at the same time on computer screens, so the position of the sun is quite obvious.

If you look at this week's chart, you will see that the sun is nowhere near Aries, currently located almost two constellations distant, in western Pisces close to the border of Aquarius. That is because the Earth, like any spinning top, wobbles on its axis over time, creating a phenomenon called precession of the equinoxes. It takes the Earth 26,000 years to complete one full "wobble." Since the wobble has moved two constellations since astronomers started keeping records, astronomers know that these records started about one-sixth of 26,000 years ago, or around 2300 BCE.

One of the remarkable things that happens on the equinox, giving the event its name, is that day and night are exactly the same length, sunrise and sunset occurring 12 hours apart. Another remarkable thing is that the equinoxes are the only dates in the year when the sun rises due east and sets due west.

Something that often puzzles people is why the equinox occurs at different times and dates from year to year. In fact, the equinox occurs at exactly the same time on the celestial calendar measured against the starry background. It is Earth's quirky calendar that causes the date to jump around. Because of the extra day thrown in every four years (leap day) to keep the calendar in synch with the stars, the time of equinox goes through a four-year cycle, until a leap year catches it back up. Here's when that cycle has placed the equinox over the last four years:

Notice that the time of equinox is still slightly out of synch, by 44 minutes, after the normal leap-year correction. This is why there are additional rules in the calendar regarding leap years divisible by 100 and 400 years. [Watch: How an Equinox Looks from Space]

Last year around this date, the place where I live in southern Canada was buried in snow. This year, on the same date, the snow is all gone, and the weather feels more like April. In most places, the weather lags about four to six weeks behind the astronomical season markers.

This time of year, the sun provides more warmth to the Northern Hemisphere than in the rest of the year; that's because the sun is rising higher in the sky each day and shining for a longer time. No matter what exactly the weather is doing where you live, enjoy those longer, warmer days.