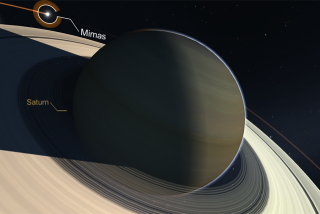 A close-up of Saturn in Star Chart for VR.
(Image: © Star Chart)

A new virtual reality app lets users explore the solar system up close, from scorching-hot Mercury to faraway Pluto and beyond.

The app, called Star Chart for VR, is billed as the first virtual reality planetarium. When used with the Google Cardboard viewer, it lets viewers experience virtual reality via their smartphones or other mobile devices.

Star Chart for VR currently includes a 3D solar system (complete with sun, planets and major moons), 88 night-sky constellations and a real-time view of the planets and stars that are visible from Earth.

"You can finally let your inner child’s astronaut loose to explore space, the night sky and our solar system in detail," reads a statement that the app's maker, Escapist Games, sent to Space.com.

"From the tiny moons of Mars to the farthest reaches of the Pluto system, from constellations and stars to looking down on Earth, you’ll get a perspective on the size and scale of the universe you’ve never had before — you’ll actually be there!" the statement adds.

Star Chart for VR is based on the augmented-reality stargazing and astronomy app Star Chart, which has 20 million users across the world. Escapist Games' catalog of games includes Star Chart, Mountain Biker and Nuclear, the last of which allows users to build the elements of the periodic table.

The virtual reality version of Star Chart is now available on Gear VR and Google Play, and will soon be released for Apple iOS systems (such as the iPad and iPhone).