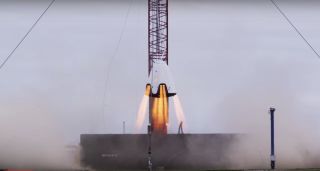 SpaceX's Dragon 2 crew capsule prototype hovers during a rocket motor test in November 2015 in this still from a SpaceX video released in January 2016.
(Image: © SpaceX)

An awesome new video of SpaceX's Dragon 2 crew capsule shows the gumdrop-shaped spacecraft hovering perfectly in place for several seconds under the power of its abort and landing rockets.

Secured by a tether, the spacecraft's eight SuperDraco engines fired and then held the machine in place at SpaceX's rocket development facility in McMurdo, Texas. SpaceX performed the test last November, but only publicly unveiled it on YouTube last week.

The engines are intended to slow descent for soft landings back on Earth after astronauts have visited the International Space Station. It will be quite the change after the bumpy, high-G landing that astronauts usually endure in returning Soyuz spacecraft.

That won't be the only benefit for future travelers on Dragon 2. Prototypes have tan leather seats and also a large, swiveling tabletlike computer that can move in front of the astronauts.

"I think it's really a big leap forward in technology," SpaceX founder Elon Musk said of Dragon 2 when it was unveiled to the public in May 2014. "It really takes things to the next level."

SpaceX is an experienced hand in sending uncrewed versions of Dragon to orbit, with the spacecraft periodically making the journey to the International Space Station under a $1.6 billion deal with NASA. The company also has a commercial crew agreement with the agency to send astronauts to the station around 2017 or 2018.

The human-rated spacecraft is supposed to be used repeatedly and to have such precise landing skills that it would be comparable to a helicopter, Musk said in 2014.

SpaceX's Dragon 2 capsule will also be able to dock autonomously with the space station (with a backup pilot ready to take manual control if needed). The current version of Dragon must be snatched by astronauts in orbit using the Canadarm2 robotic arm attached to the station.