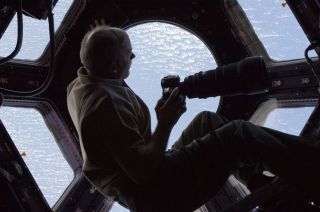 NASA astronaut Jeff Williams, seen aboard the space station in March 2010, will devote part of his next mission, launching in March 2016, to highlighting the significance of the history of the orbiting outpost.
(Image: © NASA)

HOUSTON — NASA's next astronaut to launch to the International Space Station will use his unique position — in both time and space — to share the history of the orbiting outpost.

Jeff Williams, in March, will become the first American to spend three long-duration expeditions aboard the space station and will set a new U.S. record for cumulative time off the Earth. The astronaut will dedicate part of his upcoming six-month expedition to highlighting how the orbital complex came to be what it is today.

"It occurred to me a few months ago that I have gotten the unique opportunity to have gone in the early days, before Expedition 1, to the space station for the first time and then to be there again, about halfway through assembly with a crew of two, and then back with a crew of three, and then later with a crew of six," Williams said in an interview after a briefing at NASA's Johnson Space Center in Houston on Thursday (Jan. 7). "So my career covers the history of the space station." [Inside the Space Station: Take the Video Tour]

Williams, whose first trip to the outpost was aboard space shuttle Atlantis in May 2000, six months before the space station's first expedition crew arrived, is now set to join the Expedition 47/48 more than 15 years later. He will launch with cosmonauts Alexey Ovchinin and Oleg Skripochka of Roscosmos on Russia's Soyuz TMA-20M spacecraft from the Baikonur Cosmodrome in Kazakhstan on March 18.

Once aboard the orbital laboratory, Williams, Ovchinin and Skripochka will join Russian cosmonaut Yuri Malenchenko, U.S. astronaut Tim Kopra and British astronaut Tim Peake with the European Space Agency (ESA), who all launched in December. Later, after those three depart in June, Williams will command the Expedition 48 crew, including Ovchinin and Skripochka, as well as Roscosmos cosmonaut Anatoli Ivanishin, NASA astronaut Kate Rubins and Takuya Onishi with the Japan Aerospace Exploration Agency (JAXA).

"I'm really looking forward to flying with this crew," Williams said. "I think if you add it up, I've been on orbit with about 45 different people, and this will add at least five more."

During their stay, the Expedition 47/48 crewmembers will facilitate about 250 research investigations and technology demos, as well as oversee the re-supply of the station with the arrivals and departures of American and Russian cargo vehicles. The crew is also expected to be aboard when a prototype habitat, the Bigelow Expandable Activity Module (BEAM), is inflated and when the first international docking adapter is installed. This adapter will enable future U.S. commercial crew spacecraft to visit the station.

Amidst that work, Williams intends to devote some of his time and outreach activities to taking a look back at what the station has accomplished and where that might lead as future missions embark outward into the solar system.

"If you go and survey the workforce right now and survey those in the general public who are following what we do, as is always the case, in the minds of many of them they don't have the awareness of how we got to where we are today," Williams said. "So, given my personal history going back ... I thought it would be a good opportunity to rehearse some of the significant milestones and the depth of history behind getting the space station built."

Williams, whose father was a high school history teacher, said he hopes to remind the world of the significance of the history behind his soon-to-be home off the Earth.

"To me, it is fair to argue that the greatest achievement of the space station program is the space station itself, and that's what I want to try, in some way, to maybe enrich the awareness of the public [about]," he said. "Not so much because of the history, but because of what that history enables us to do in the future."