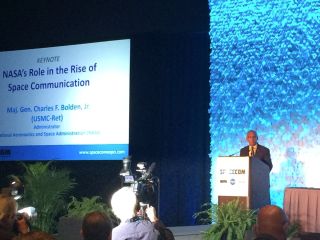 HOUSTON -- Work needs to be done by commercial companies to take up the responsibility of supporting science and human astronauts in low-Earth orbit and beyond, according to NASA Administrator Charles Bolden.

Speaking yesterday (Nov. 17) at the first annual SpaceCom Expo here, Bolden talked about the need for a marketplace in low-Earth orbit where "NASA is not the only customer." This could potentially include maintaining the American side of the International Space Station, which serves as a one of a kind microgravity laboratory and testing ground for human trips into deep space. And Bolden doesn't imagine the work of private companies will stop there.

In reference to the commercial space market that has already begun to blossom, Bolden said, "Now that the doors have been kicked open, I'm looking forward to new ideas about what we do next and how we keep that market humming. Who has a plan for non-NASA astronauts to conduct low-Earth orbit ops? That's my question." [Building the International Space Station (Photos)]

Looking even further into the future, Bolden added, "As we focus on sending humans to Mars, it will likely be commercial companies and international partners who assume a lead role in taking humans back to the surface of the moon. And I'm all for that."

Bolden was not the only speaker at SpaceCom discussing the need for commercial companies to take over more responsibilities on the station, or to create new orbiting laboratories to replace it. NASA is committed to maintaining its portion of the station through 2024, but as Bolden said, the agency would like to dedicate its resources to more ambitious goals, like sending humans to Mars. But, as was noted by commercial spaceflight leaders at another recent conference, a human presence in low-Earth orbit provides information and training for human journeys to more distant space locations, and many leaders advocate for maintaining a human presence in low-Earth orbit while pursuing human trips to the moon or Mars.

The space station is also an invaluable scientific resource. The weightless environment provides a unique variable for testing all kinds of physical, chemical and biological processes. Currently, scientists must apply to NASA to have their experiments taken to the orbiting laboratory, but some commercial companies are beginning to change that. NanoRacks allows customers to send small experiments to the station, and Made In Space, the company that sent the first 3D printer into microgravity, can use its machine for commercial purposes. Companies with more capital can also pay to have scientific payloads launched on top of commercial rockets, but there is currently no option to put an experiment in space for a long duration.

Bolden noted that commercial spaceflight companies will be filling a larger role in NASA's human spaceflight program than ever before, when private companies begin delivering NASA astronauts to the International Space Station as part of the Commercial Crew Program. NASA has now officially ordered a CST-100 space taxi from Boeing. SpaceX was also awarded a contract to support the construction of its Dragon crew capsule, although NASA has not yet ordered one of the vehicles. Currently, NASA astronauts are launched to the space station aboard the Russian Soyuz capsule.

"If all goes well and we get full support from Congress, my hope is we will fly the first commercial crew capsules in late 2017, early 2018," Bolden said. "For the first time in quite some time we will no longer be dependent on any other nation to get our crews into space, and for us in this day and age that is critically important."