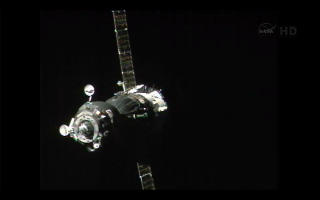 An International Space Station camera caught sight of the Soyuz space capsule as it made its approach to the orbiting outpost on March 28, 2013.
(Image: © NASA TV)

NASA has signed a new deal that will keep American astronauts flying on Russian spacecraft through early 2017 at a cost of $70.7 million per seat — about $8 million more per astronaut than the previous going rate.

The $424 million deal, which was announced today (April 30), is good for six seats aboard Russia's Soyuz space capsules. Under the agreement, Soyuz vehicles will now ferry NASA astronauts to and from the International Space Station through 2016, with return and rescue services extending until June 2017. The previous contract provided Soyuz flights for NASA astronauts through 2015, at a cost of roughly $62.7 million per seat.

NASA has been dependent on the Soyuz since the retirement of its space shuttle fleet in July 2011. The agency is currently encouraging American private spaceflight firms to develop their own astronaut taxis under its Commercial Crew Program. [The Top 10 Private Spaceships]

NASA had hoped that at least one homegrown crew-carrying spaceship would be up and running by 2015, but Congress' failure to fully fund Commercial Crew has made that impossible, agency chief Charles Bolden said. NASA officials are now targeting 2017 for the first American astronauts to fly on commercial spacecraft.

Lawmakers approved $489 million and $406 million for Commercial Crew in the last two years, respectively, far short of the $830 million and $850 million laid out in President Barack Obama's federal budget requests.

"Because the funding for the President's plan has been significantly reduced, we now won't be able to support American launches until 2017," Bolden wrote in a blog post today.

"Even this delayed availability will be in question if Congress does not fully support the President's fiscal year 2014 request for our Commercial Crew Program [$821 million], forcing us once again to extend our contract with the Russians," Bolden added.

The top three contenders to fly NASA astronauts to and from the space station are SpaceX, Sierra Nevada Corp. and Boeing. SpaceX is working on a manned version of its Dragon capsule; Boeing is also developing a capsule, called the CST-100, while Sierra Nevada is building a space plane called Dream Chaser.

NASA is also looking to the private sector to fill the space shuttle's cargo-carrying shoes. The agency has signed billion-dollar deals with two American firms, SpaceX and Orbital Sciences Corp., to fly robotic resupply missions to the orbiting lab.

SpaceX has already completed two of its contracted 12 missions using its Dragon capsule and Falcon 9 rocket. Orbital test-flew its Antares rocket for the first time earlier this month and is expected to fly a demonstration mission to the space station with Antares and a spacecraft called Cygnus within the next few months.