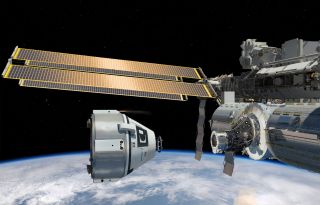 A Boeing CST-100 crew capsule approaches the International Space Station carrying a new crew for NASA in this artist's illustration. NASA has awarded Being its first order for a commercial crew flight in 2017.
(Image: © Boeing)

NASA has awarded Boeing with the first order for a commercial crew change flight to the International Space Station once the company's new CST-100 space taxi is ready for manned flights in 2017.

Both Boeing and SpaceX are building private spaceships to ferry astronauts on round trips to the space station for NASA. While SpaceX has not received an order yet, NASA said the company will likely receive one later this year. Who flies first will be determined at a later date.

"Final development and certification are top priority for NASA and our commercial providers, but having an eye on the future is equally important to the commercial crew and station programs," said Kathy Lueders, manager of NASA’s commercial crew program, in a statement. "Our strategy will result in safe, reliable and cost-effective crew missions." [Boeing's CST-100 Space Capsule in Pictures]

The milestone follows on from Boeing successfully finishing the fourth stage in its Commercial Crew Transportation Capability (CCtCap) contract with NASA. Boeing showed the agency that its spacecraft design was ready for assembly, integration and testing.

"We’re on track to fly in 2017, and this critical milestone moves us another step closer in fully maturing the CST-100 design," said John Mulholland, Boeing’s vice president of commercial programs, in a statement.

NASA makes its orders for CCtCap two or three years before the mission takes place, to give time for the companies to build the spacecraft. That said, Boeing (and SpaceX, when its mission is awarded) will need to fully finish its certification before being allowed to fly the astronauts.

Once the crew launches are running, a standard mission will see four crew members on board that are either from NASA or sponsored by NASA. The mission profile calls for the spacecraft to carry 220 pounds of pressurized cargo and to remain docked to the station for up to 210 days.

NASA added that the 2017 flight date depends on Congress awarding the agency's full budget request for the 2016 fiscal year, and the ones following.