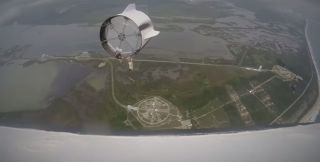 SpaceX's first Dragon crew capsule separates from its finned trunk section (seen at upper left) in this still image from a video recorded by an onboard camera during a May 6, 2015 launch abort system test in Florida's Cape Canaveral Air Force Station.
(Image: © SpaceX)

SpaceX has released a video showing Dragon's May 6 flight, an unmanned launch from Florida's Cape Canaveral Air Force Station that tested the capsule's launch-escape system. The 2-minute video integrates footage taken by cameras aboard the spacecraft, showing key events such as parachute deployment up close — and providing great Dragon's-eye views of the Space Coast landscape.

It fades out, however, just before the capsule splashes down in the Atlantic Ocean.

The robotic version of Dragon already flies cargo missions to the International Space Station for NASA. SpaceX is developing a crew-carrying variant under a separate $2.6 billion deal with the space agency, which wants Dragon and Boeing's CST-100 capsule to start ferrying astronauts to and from the orbiting lab by 2017. (Boeing holds a $4.2 billion NASA contract to get the CST-100 ready for manned flight.)

The May 6 "pad abort" test was a key step toward that crew-carrying goal, showing how Dragon could get astronauts to safety in the event of a launch emergency. During the test, Dragon sat atop a truss structure (rather than SpaceX's Falcon 9 rocket, its usual ride), then fired up its eight SuperDraco escape engines, which together generate about 120,000 lbs. of thrust.

The SuperDracos blasted Dragon from 0 to 100 mph (160 km/h) in 1.2 seconds, accelerating the capsule to a top speed of 345 mph (555 km/h), SpaceX representatives said. Dragon's drogue and main parachutes deployed as planned, and the spacecraft floated down to a successful splashdown about 1.4 miles (2.2 kilometers) offshore.

The entire test, from engine start to ocean landing, lasted less than 2 minutes.

Dragon was outfitted with about 270 sensors for the abort test, and it carried a dummy to investigate how a real astronaut would have fared.