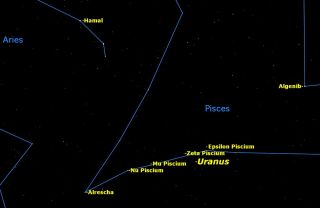 Uranus is easy to spot with binoculars in the constellation Pisces.
(Image: © Starry Night Software)

Sometimes a whole bunch of different sky events happen over a very short period, giving skywatchers a chance to witness many unusual events in a few days. The next week or two is a case in point, with Uranus, Mercury, Jupiter and Mars are making notable appearances in the night sky.

First, the planet Uranus is just past opposition, so it is visible all night long. It's also in a location where you can spot its dim glow rather easily. You will need a binocular to bring out the faint planet from its surrounding stars

Look at the chart in this guide and you will see how to spot Uranus using an easy bit of star-hopping. [Sky Maps for October's Night Sky Events]

Here's how star-hopping works: Start with visualizing an equilateral triangle with one side marked by Hamal in Aries and Algenib, the lower left star of the square of the constellation Pegasus. The third point of the triangle is Alrescha, Alpha Piscium.

Although only fourth magnitude, Alrescha is the second brightest star in the dim constellation of Pisces. It marks the knot which joins the two chains of stars attached to the two fish of Pisces. Follow the lower chain of stars to the right under the square of Pegasus to find Uranus.

The stars that make up this chain do not have names, only Greek letters. Starting at Alrescha, they are Nu, Mu, Zeta, and Epsilon. You don't need to know their names, just look for Uranus between the last two, a bit to the south of the line joining them.

In binoculars, Uranus will look like a blue green 6th magnitude star. In a powerful telescope, it will show as a tiny blue-green disk 3.7 arc seconds in diameter.

Planetary diameters are usually measured in arc seconds: the number of seconds they subtend at the observer's eye. There are 360 degrees in a circle, 60 minutes in a degree, and 60 seconds in a minute. To give you some idea how tiny the planets appear, the sun and moon are both about 30 arc minutes in diameter, or 1,800 arc seconds. The largest any planet can appear to Earthbound astronomers is about 1 arc minute or 60 arc seconds in diameter (this is what Venus looks like when it is at its closest). Thus, all the planets are typically smaller in a telescope than the largest craters on the moon.

On Thursday, Oct. 15, Mercury will be at the farthest it strays west of the sun. Because it is only 18 degrees away from the sun, it can best be seen about half an hour before sunrise. Again it is easiest to spot in binoculars.

In the predawn sky, Mercury appears about twice the angular diameter of Uranus, so will look like a tiny half-moon that is 8 arc seconds across in a large telescope.

On Sunday morning, Oct. 18, Mars will be in conjunction with Jupiter, and the two planets will be close enough together that both will fit in the same field of a small telescope. Look for Mars just above Jupiter.

Both will be on the far side of the sun, so much smaller than they usually appear when in the night sky. Jupiter measures 32 arc seconds while Mars is only 4.1 arc seconds, half the size of Mercury. By the time they reach opposition in spring of 2016, they will swell to 44 and 18.3 arc seconds, respectively.

Speaking of Jupiter, there will be two interesting passages of the shadows of its moons across its face in the next two weeks. These require at least a 5-inch telescope and steady observing conditions.

Again on Sunday morning, October 18, the shadow of the moon Io will chase the shadow of Ganymede across Jupiter's face. Both shadows will be on Jupiter from 6:42 to 8:08 a.m. EDT, but will be increasingly hard to see after sunrise, which will occur at around 7:30 a.m. your local time. Observers in western parts of North America will have a better view because the transits will occur between 3:42 and 5:08 a.m. PDT, long before sunrise, though Jupiter will be lower in the sky.

Exactly a week later, on Sunday, Oct. 25, there will be another double shadow transit. This one is especially interesting because both shadows enter the disk at almost the same time, 8:36 a.m. EDT or 5:36 a.m. PDT, but then cross at very different speeds, Io's shadow taking 2 hours and 17 minutes to cross while Ganymede's takes 3.5 hours, because of its greater distance from Jupiter and larger orbit diameter.

This transit occurs in full daylight in eastern North America, so probably won't be visible, but is at a much more favorable time for western observers.

All in all, planetary observers will have a busy week ahead and, as always, we welcome your images of these events.

Editor's note:If you capture a great image of the planets or any other night sky view and would like to share it with Space.com and our news partners for a story or gallery, send photos and comments in to managing editor Tariq Malik at: spacephotos@space.com.