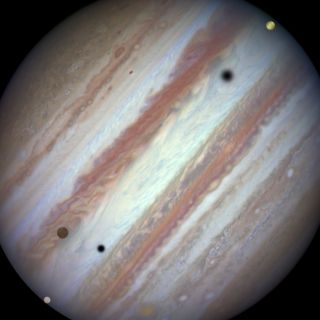 Three moons and their shadows move across Jupiter during a rare triple transit on Jan. 24, 2015. Europa is at lower left, Callisto is above and to the right of Europa and Io is approaching Jupiter's eastern limb. Europa's shadow is toward the left side of the image and Callisto's shadow to the right.
(Image: © NASA/ESA/Hubble Heritage Team)

NASA's Hubble Space Telescope has captured three of Jupiter's moons marching across the huge planet's disc, a stunning sight that happens only once or twice every 10 years.

The rare triple-moon conjunction on Jupiter, which Hubble witnessed on Jan. 24, involved Io, Callisto and Europa — three of the gas giant's four Galilean moons (so named because they were discovered by astronomer Galileo Galilei in the early 17th century).

"The moons in these photos have distinctive colors. The ancient, cratered surface of Callisto is brownish; the smooth icy surface of Europa is yellow-white; and the volcanic, sulfur-dioxide surface of Io is orange," representatives of the Space Telescope Science Institute (STScI) in Baltimore, which operates Hubble, wrote in a statement today (Feb. 5). [See more photos of Jupiter's rare triple-moon shadow dance]

"The apparent 'fuzziness' of some of the shadows depends on the moons' distances from Jupiter," they added. "The farther away a moon is from the planet, the softer the shadow, because the shadow is more spread out across the disk."

The conjunction lasted about 42 minutes. The fourth Galilean moon, Ganymede, was outside Hubble's field of view during the triple transit, STScI representatives said.

Volcanic Io is the innermost of the Galilean moons, completing one lap around Jupiter every 1.8 days. Europa, Ganymede and Callisto have orbital periods of 3.6, 7.2 and 16.7 days, respectively.

With a diameter of 3,270 miles (5,260 kilometers), Ganymede is the largest natural satellite in the solar system. Indeed, it's bigger than the planet Mercury.

Europa is the smallest Galilean moon, at 1,900 miles (3,100 km) wide, but it generates excitement and intrigue disproportionate to its size. The satellite harbors an ocean of liquid water beneath its icy shell, and this ocean is thought to be in contact with Europa's rocky mantle, making possible all kinds of interesting chemical reactions.

Indeed, many scientists regard Europa as the solar system's best bet to host alien life. NASA is mapping out a robotic mission to Europa, which agency officials say should be ready to launch by the mid-2020s.