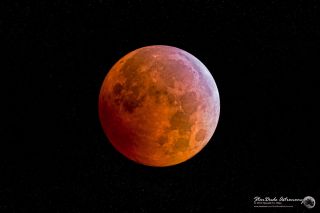 The rare "supermoon" total lunar eclipse on Sunday (Sept. 27) will mark the end of a great eclipse-viewing era.

The Sunday evening eclipse is the last in a "tetrad" — a term for four total lunar eclipses happening at six-month intervals — that has been stunning skywatchers across the United States for the past 18 months, and also sparking conspiracy theories about what it could mean.

"The most unique thing about the 2014-2015 tetrad is that all of them are visible for all or parts of the USA," NASA eclipse expert Fred Espenak said in a statement last year. [Supermoon Lunar Eclipse: Complete Blood Moon Coverage]

What makes Sunday's eclipse even more special, however, is that it will occur when the moon is at its closest point to Earth in its elliptical orbit and therefore appears abnormally large and bright in the sky. This so-called "supermoon" eclipse will be the first one since 1982, and the last until 2033.

A lunar eclipse happens when the moon passes into the shadow of the Earth. When the moon is totally eclipsed, it goes completely in the shadow, turns red or reddish-brown, and stays that way for up to an hour. No special equipment or eye protection is needed to see it, and it is viewable anywhere the sky is dark and the moon is visible.

While the alignment of the sun, Earth and moon make lunar eclipses happen about twice a year, usually it's a total eclipse followed by a different kind of eclipse. Tetrads have been a frequent occurrence in the 21st century — there are eight in this century alone, Espenak pointed out in the statement — but that doesn't always happen. Between 1600 and 1900, there were no tetrads at all.

But the number of "blood moons" seen in the past 18 months sparked some conspiracy theories about possible dangers to humanity. In 2014, according to Space.com skywatching columnist Joe Rao, online rumors drew a link between the eclipses and biblical prophecies of the apocalypse — a theory also popularized in a book called "Four Blood Moons" by John Hagee (Worthy Publishing, 2013).

Editor's Note: If you snap an amazing picture of the Sept. 27 total lunar eclipse, you can send photos, comments and your name and location to managing editor Tariq Malik at spacephotos@space.com.