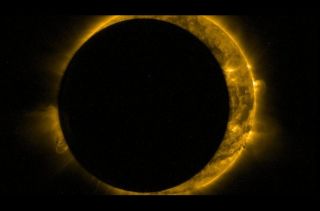 ESO’s La Silla Observatory imaged the Sculptor Dwarf galaxy, a galaxy close to our own that’s much smaller and older than the Milky Way, but incredibly faint. When carefully imaged, it has a lot to tell about star and galaxy formation. [Read the whole story.]

A gallery of gorgeous new images shows a cone-shaped space capsule shooting like a meteor through the atmosphere of Mars, and descending quickly toward the surface before its thrusters set it down gently in the middle of a rocky, uninhabited landscape. The human crew prepares to set food on the Red Planet. [Read the whole story.]

NGC 3921 consists of a pair of interacting galaxies in the constellation of Ursa Major (The Great Bear). Image released Sept. 14, 2015. [Read the full story.]

Astrophotographer Mia Stålnacke sent in a photo of an aurora corona seen in Kiruna, Sweden, on Sept. 11, 2015. [Read the full story.]