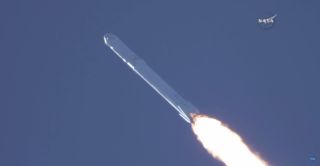 SpaceX's Falcon 9 rocket broke apart about 2 minutes after launching the company's robotic Dragon cargo capsule toward the orbiting lab Sunday (June 28). If the mishap had occurred during a crewed launch of the "Dragon V2" capsule variant, it likely would not have caused any fatalities, said SpaceX President and Chief Operating Officer Gwynne Shotwell.

"The escape system slated for the second version of Dragon would have — should certainly have taken the astronauts to a safe place after an anomaly like this," Shotwell said during a news conference following the accident Sunday. "In fact, it's designed to take a far more energetic event and get the astronauts safely away." [See photos from the failed SpaceX launch]

SpaceX is developing Dragon V2 to fly astronauts to and from the space station under a $2.6 billion deal with NASA that was announced in September. The agency also awarded Boeing $4.2 billion to finish work on its CST-100 capsule, with the hope that one or both crew-carrying craft will be up and running by the end of 2017.

The launch escape system Shotwell mentioned is one of the key modifications that distinguish Dragon V2 from the robotic cargo capsule. The system consists of eight "SuperDraco" rocket engines designed to steer the spacecraft to safety in the event of a launch emergency such as the one that occurred Sunday. (The crewed Dragon also will be launched by the two-stage Falcon 9.)

SpaceX successfully demonstrated the escape system during a "pad abort test" last month at Florida's Cape Canaveral Air Force Station. The SuperDracos fired up as planned, blasting a Dragon test vehicle out over the Atlantic Ocean, into which it made a soft, parachute-aided splashdown.

Interestingly, the robotic Dragon apparently managed to survive Sunday's rocket explosion, at least initially, even though the capsule was right in the middle of the fray, SpaceX representatives said.

"We did have Dragon telemetry after the event, so Dragon was transmitting and appears to have been healthy for some period of time," Shotwell said.

The cause of the accident remains unknown, but preliminary analyses point toward an "overpressure event" in the Falcon 9's upper-stage oxygen tank, company representatives have said.

SpaceX holds a $1.6 billion NASA contract to fly at least 12 unmanned supply missions to the space station. Sunday's launch kicked off the seventh of these cargo runs; all of the previous six missions were successful.

Sunday's mishap marked the third cargo-mission failure in the past eight months. Orbital ATK's Antares rocket exploded just seconds after liftoff in October, ending the company's third resupply flight. (Orbital signed its own $1.9 billion NASA cargo deal to make eight supply runs using Antares and the company's Cygnus freighter.) And Russia's Progress 59 vessel crashed back to Earth in May, apparently victimized by a problem with its Soyuz rocket.