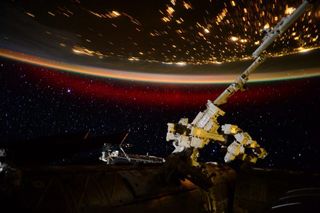 Astronaut Scott Kelly captured this view of Earth's aurora on Monday. An intense solar storm has created auroras that have been sighted as far south as Philadelphia.
(Image: © Scott Kelly/Twitter)

Brilliant streaks of green, purple and pink lit up skies across Canada and many northern U.S. states on Monday night, in brilliant auroral displays following a massive solar storm.

The auroras were seen as far south as Philadelphia and northern New Jersey last night (June 22), and gave astronauts aboard the International Space Station a stunning celestial light show. The solar storm that caused the auroras was declared a level G4 (severe), with a maximum possible ranking of G5 (extreme).

Auroras, also known as the northern and southern lights, are caused by bursts of powerful particles ejected from the sun that collide with Earth's atmosphere. The solar storm behind last night's spectacular light display continues to rage, and officials say auroras should be visible again tonight (June 23) for viewers in Canada and parts of the U.S. [Amazing Auroras: Breathtaking Northern Lights Photos of 2015]

Photographer Jeff Berkes snapped photos of the rippling northern lights over a field in southern Philadelphia. In an email to Space.com, Berkes said these were the most intense northern lights he has ever seen in this location.

Meteorologist Eric Holthaus wrote in an article for Slate that the coronal mass ejection had picked up two smaller, slower ejections from last week, building in power as the particles raced toward Earth. Once there, they whipped up a geomagnetic storm as the Earth's magnetic field adjusted to the new addition — and the results could be seen all across the northern United States and Canada.

The solar storm erupted from the sun during the day on Sunday (June 21). As the sun belched out a fiery solar flare, it also released a huge coronal mass ejection — a stream of charged particles. The size and strength of this particular particle ejection were dubbed "impressive" by scientists working on NASA's Advanced Composition Explorer mission as the storm shot by the ACE spacecraft on the way to Earth Sunday afternoon.

A real-time photo gallery of the lights is building at SpaceWeather.com. While auroras pose no threat to people on Earth, powerful ejections of particles from the sun can damage satellites orbiting Earth and power grids on the ground.

Editor's note: If you capture an amazing view of the northern lights or another night sky sight that you'd like to share with Space.com, send photos and comments in to: spacephotos@space.com.