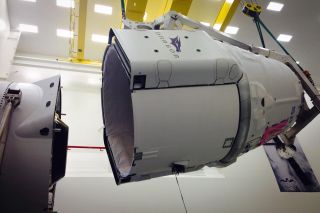 All systems are go for the Monday launch of a SpaceX Dragon space capsule carrying NASA cargo the International Space Station on Monday (April 13), a mission that will also include a novel reusable rocket landing attempt.

SpaceX is slated to launch an unmanned Dragon spacecraft atop the company's Falcon 9 rocket at 4:33 p.m. EDT on Monday from Cape Canaveral Air Force Station in Florida. It will be SpaceX's sixth of 12 delivery missions for NASA under a $1.6 billion contract for resupply flights.

Monday's launch will also mark SpaceX's third attempt to land a Falcon 9 rocket stage on a floating barge in the Atlantic Ocean. During the first attempt in January, the returning Falcon 9 rocket ran out of hydraulic fluid early, crashing into the drone ship in a spectacular fireball. A second attempt in February was thwarted by bad weather and high seas, forcing SpaceX to practice the landing over water and let the rocket stage splash into the ocean.

"The weather was terrible on the second attempt, and it looks like the weather is significantly better [this time]: four to six feet swells," said Hans Koenigsmann, SpaceX vice president for mission assurance, in a televised NASA briefing on Sunday (April 12).

The rocket landing attempt is part of SpaceX's reusable rocket research to lower the cost of spaceflight. However, the rocket landing test is a secondary goal to a successful Dragon launch. If all goes well, the Dragon capsule should arrive at the space station 38 hours after liftoff. Astronauts on the station plan to capture the spacecraft with a robotic arm and attach it to a docking port.

Among Dragon's primary goals this time is to help NASA catch up on resupplying the station after the explosion of an Orbital Sciences rocket last October.

NASA prefers to have six months' supplies for the astronauts on board the station in case of hiccups with launch vehicles. Right now the stock of food, water and related supplies is at roughly four or 4.5 months, NASA's Dan Hartman said at the same briefing.

The agency expects several more launches in the coming months that will slowly help bring up those levels, he added, bringing them up to six months' reserve again by November. This includes two other planned SpaceX flights, cargo ships from Japan and Russia, a crew launch from Kazakhstan and in the fall, an Orbital Sciences launch.

But first, Dragon must accomplish its mission of bringing roughly 4,400 lbs. (1,995 kilograms) of supplies, science experiments and equipment up to the station, including a new group of rodents for orbital research and an ISSpresso coffee machine. Then the spacecraft will come back to Earth after about a month in orbit, splashing down with items that are no longer needed on station.

"It will stay up there for 35 days, which is the longest we've ever done, I believe," Koenigsmann said. "Then it will be unberthed and will depart from the ISS and land in the Pacific Ocean, basically in our front yard."

Should Falcon 9's first stage arrive on the drone as planned, Koenigsmann said it would be a large step forward in reducing launch costs. SpaceX CEO Elon Musk has repeatedly said that reusable rockets are key to making space exploration more accessible for research and human exploration.

Koenigsmann joked that today's approach to launches is similar to buying a new car every time you wanted to do something different. "I think in the long term this may change completely how we approach transportation to space."

If the rocket stage does prove reusable, the next step would be to determine how often it could be: 20 times, 50 times or some other number, Koenigsmann added. In general this would make space transportation "more like an airplane-type operation," he said.