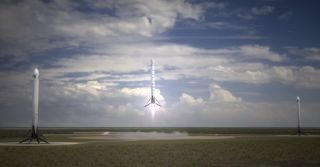 The three boosters that comprise the first stage of SpaceX's Falcon 9 heavy rocket land on a launch pad after flying a payload to space in a new animation from the private spaceflight company.
(Image: © SpaceX)

An amazing new video from SpaceX shows the spaceflight company's incredible plans for a reusable mega-rocket.

The 2.5-minute Falcon Heavy rocket animation shows the spaceflight firm's plans to land the three boosters of its giant rocket back on Earth after launching missions to orbit. The three nine-engine boosters are equivalent to the booster used is used to power the core stage of the Falcon 9 rocket used to launch payloads to space currently. SpaceX representatives expect to start flights of the Falcon 9 Heavy later this year.

"When Falcon Heavy lifts off later this year, it will be the most powerful operational rocket in the world by a factor of two," SpaceX representatives wrote in a video description. "Thrust at liftoff is equal to approximately eighteen 747 aircraft operating simultaneously." [How SpaceX's Falcon Heavy Rocket Works (Infographic)]

SpaceX's Falcon Heavy will stand a towering 224.4 feet (68.4 meters) tall with 27 engines powering its three-booster first stage. The rocket's second stage has one engine that can help deliver a satellite or other payload to a chosen orbit after it separates from the first stage of the rocket.

The new video shows a Falcon Heavy soaring into space from the historic Launch Complex-39A at NASA's Kennedy Space Center in Florida. (SpaceX signed a deal with NASA to use the launch pad in 2014). After the two side boosters separate, they turn back around and make a perfect landing, upright on a pad on Earth. The core booster of the rocket separates from the second stage before flying back to the ground like the other two nine-engine boosters. The rocket's second stage finishes delivering its satellite payload to orbit.

Achieving complete rocket reusability has long been a goal of SpaceX and its founder, billionaire entrepreneur Elon Musk, as a way of dramatically lowering the cost of spaceflight for both unmanned launches and, eventually, crewed missions. But SpaceX still has a way to go before this kind of reusable rocket dream can become a reality.

The company recently brought the boost stage of its current Falcon 9 rocket back from space in an attempt to land it on a floating platform in the Atlantic Ocean. While SpaceX did managed to return the stage back to Earth, it exploded after impacting the platform. SpaceX founder Elon Musk later said the returning rocket ran out hydraulic fluid used to control its stabilization fins during the descent.

The company has managed to successfully practice Falcon 9 rocket landings in the ocean just before splashdown, and Musk recently said that SpaceX will try to land another Falcon 9 booster on its ocean platform soon, possibly in February.

"Next rocket landing on drone ship in 2 to 3 weeks [with] way more hydraulic fluid," Musk wrote on Twitter on Jan. 16. "At least it [should] explode for a [different] reason."