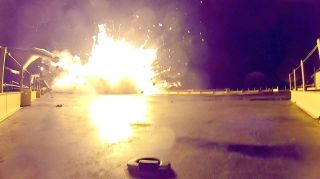 SpaceX's reusability test didn't go according to plan when the Falcon 9 rocket stage impacted its drone ship, a floating platform it was meant to land on. Image released Jan. 16, 2015.
(Image: © Elon Musk Twitter)

An incredible video and series of photos show the fiery fate of a rocket stage during a reusable rocket test earlier this month.

Elon Musk — founder of the private spaceflight company SpaceX — has released a series of amazing images detailing the Jan. 10. The photos and video show the boost stage of a Falcon 9 rocket exploding as it impacts a floating drone ship in the Atlantic Ocean. The SpaceX rocket had just delivered an uncrewed Dragon capsule bound for the International Space Station to orbit before coming back to Earth in an attempt to land upright on the floating platform.

The difficult test didn't go exactly according to plan. The rocket's fins used to steer the vehicle during the test ran out of hydraulic fluid just before landing, Musk wrote in a series of Twitter posts. SpaceX's next reusability test should take place in two to three weeks and that rocket should be carrying more hydraulic fluid than the last test, Musk added today. [SpaceX's Reusable Rocket Landing Test Explained (Infographic)]

The new SpaceX video and photos show the Falcon 9 stage exploding in a corner of the ship. The roar of the crashing rocket can be heard in the 7-second video. Initially, SpaceX representatives didn't expect to get any imagery because of the dark conditions during landing, but these newly-released photos are still frames from video recorded on the floating platform.

SpaceX's drone ship didn't take on any serious damage, but it will need some relatively light repairs, according to Musk. The ship is a relatively small target at 300 feet long by 170 feet wide (91 by 52 meters) with its "wings" extended. The booster managed to target the platform when it was about 150 miles (240 kilometers) above the landing site.

The reusability test itself was unprecedented. SpaceX performed two soft landings with Falcon 9 stages in 2014, but both of those were directly in the water, not on a platform. Because of the difficult nature of the test, company representatives didn't predict very high odds of success.

Musk has long been interested in making reusable rockets a reality in order to dramatically reduce the cost of spaceflight.

The reusability test was not the main focus of the Saturday launch, however. The Dragon spacecraft successfully delivered its supplies to the space station as part of SpaceX's fifth official cargo mission to the orbiting outpost under a contract with NASA.