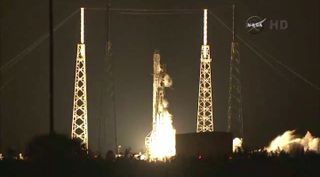 A commercial Falcon 9 rocket built by SpaceX successfully launched a Dragon cargo ship toward the International Space Station early Saturday (Jan. 10) — and then returned to Earth, apparently impacting its target ocean platform during a highly anticipated landing test in the Atlantic. The result: "Close, but no cigar," according to SpaceX chief Elon Musk.

The Falcon 9 rocket launched into space at 4:47 a.m. EST (0947 GMT) Saturday from Florida's Cape Canaveral Air Force Station, kicking off SpaceX's fifth unmanned cargo mission to the orbiting lab for NASA after a four-day delay. The liftoff was originally scheduled for Tuesday (Jan. 6), but was pushed back because of an issue with an actuator on the rocket's second stage.

Not all of the action Saturday was in the upward direction: The company also aimed to bring the Falcon 9's first stage down for a precision landing on an "autonomous spaceport drone ship" in the Atlantic Ocean. The rocket stage hit its target, but a bit too hard. [SpaceX's Reusable Rocket Landing Test Explained (Infographic)]

"Rocket made it to drone spaceport ship, but landed hard. Close, but no cigar this time. Bodes well for the future tho," Musk tweeted shortly after the launch.

"Ship itself is fine. Some of the support equipment on the deck will need to be replaced..." he added. "Didn't get good landing/impact video. Pitch dark and foggy. Will piece it together from telemetry and ... actual pieces."

The drone-ship test is part of SpaceX's effort to develop fully and rapidly reusable rocket technology, which Musk and others say could cut the cost of spaceflight dramatically. Before launch, Musk and other SpaceX representatives repeatedly stressed that the odds of successfully landing the Falcon 9 rocket stage on the ocean platform were relatively low because of the unprecedented nature of the technology test.

In a post-launch statement, SpaceX officials confirmed that the predawn darkness and thick fog prevented good video views of the landing try, and that the company is now "in the process of evaluating invaluable telemetry data which will inform future attempts."

SpaceX successfully soft-landed a Falcon 9 first stage in the ocean twice in 2014 — but just in the water, not on a floating platform. Saturday's attempt required a big step up in touchdown precision; the drone ship measures just 300 feet long by 170 feet wide (91 by 52 meters) with its "wings" extended, and the rocket stage targeted it after attaining a maximum altitude of 150 miles (240 kilometers) or so.

As exciting as the reusability test was, getting Dragon to orbit was the launch's chief objective. The capsule should arrive at the station early Monday (Jan. 12), at which point astronauts will grapple it using the orbiting lab's huge robotic arm.

Dragon is loaded with more than 5,000 pounds (2,270 kilograms) of food, scientific experiments and spare parts on this journey. Some of the parts are replacements for objects lost when Orbital Sciences Corporation's Antares rocket exploded just after liftoff in late October, destroying the company's Cygnus cargo craft.

Both SpaceX and Orbital hold billion-dollar deals to fly robotic supply missions to the space station for NASA; Orbital had completed two successful flights before the October accident.

"We have about 1.8 metric tons of pressurized cargo; I think that's the most we've crammed into a Dragon to date," NASA International Space Station program manager Mike Suffredini said during a prelaunch briefing on Jan. 5. (The remainder of Dragon's load is packed into the capsule's unpressurized cargo bay.)

"That's been with the help of the SpaceX folks, who've used quite a bit of ingenuity to help us put items into all the little cracks and crevices as we kind of lean on the Dragon vehicle to supply us here for the next little while until the Orbital folks are flying again," Suffredini added.

The science gear aboard Dragon includes a NASA instrument called the Cloud-Aerosol Transport System (CATS), which will use a laser to measure the distribution of clouds and the tiny particles that make up haze, dust, smoke and other pollutants in Earth's atmosphere. CATS' work could lead to a better understanding of climate change and its effects, NASA officials said.

Dragon will spend a month berthed to the station. It's scheduled to return to Earth for splashdown and retrieval in the Pacific Ocean, off the coast of southern California, on Feb. 10, NASA officials said.

Dragon is the only cargo vehicle operating today that makes it back to Earth in one piece; the others are designed to burn up in the planet's atmosphere when their time in orbit is done.

Saturday's launch was originally scheduled for mid-December, but it was delayed until January to allow extra time for rocket checks.

Editor's note: This story was updated at 8:30 a.m. ET to include additional details from SpaceX's post-launch statement.