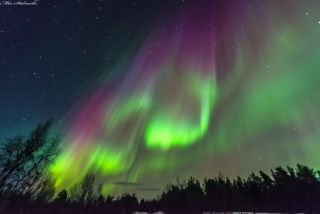 Astrophotographer Mia Stålnacke sent in a photo of an auroral display over of Kiruna, Sweden, taken on March 17, 2015.
(Image: © Mia Stålnacke)

Green auroras danced in skies around the world last night thanks to a massive solar storm that super-charged northern lights displays for St. Patrick's Day. Skywatchers captured stunning pictures of auroras in the northern United States, Canada, northern Europe and other parts of the world.

The spectacular aurora photos were captured during a powerful geomagnetic storm that lasted through the day Tuesday (March 17) and appears to have tapered off today. Scientists working with the Slooh Community Observatory were able to broadcast their views of the northern lights from Iceland while on their way to check out the total solar eclipse happening Friday (March 20).

"As the skies got slightly darker, we started seeing some of these wonderful colors, so what a day for me to see my first aurora, on a geomagnetic storm of this size. Wonderful," Slooh astronomer Paul Cox said during the Iceland aurora webcast.

Space.com readers in Sweden, Wisconsin, Croatia and other parts of the world sent in incredible images of the glowing auroras.

"I live in the eco-village in Kaluga region," skywatcher Alexey Kirillov told Space.com via email. "It is about 100 km [60 miles] from Moscow. Yesterday night it was possible to see great auras of northern lights here."

Kirillov sent in an amazing image of green, purple and white aurora shimmering above a tree-lined landscape.

Skywatcher Matthew Moses managed to capture a meteor streaking through the sky while he was photographing the aurora in Wisconsin.

"Just before midnight I saw a flash of a meteor as I was out photographing the northern lights," Moses told Space.com via email. "Luckily my shutter was open so I anxiously checked the back of the camera and sure enough at 11:55 CST a meteor shows as a bright streak in the Eastern edge of the green aurora band. This was seen from the shore of Lake Superior out on Wisconsin Point just outside Superior, WI."

Even astronauts on the International Space Station got a taste of the St. Patrick's Day geomagnetic storm. NASA's Terry Virts caught the green auroras on camera as he orbited Earth in the space laboratory.

"Nature's way of celebrating #StPatricksDay," Virts wrote in a post on Twitter. "The most amazing green I've seen, courtesy of a solar flare."

Editor's Note: If you have an amazing photo of last night's aurora or any other night sky view that you'd like to share for a possible story or image gallery, please contact managing editor Tariq Malik at spacephotos@space.com.