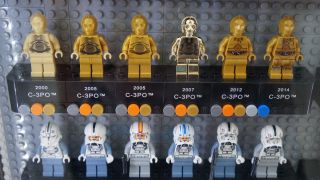 A new Disney XD show called "LEGO Star Wars: Droid Tales" will premiere on the channel later this year. It tells the "Star Wars" story from a droid's point of view. This image shows the evolution of LEGO C-3PO throughout the years.
(Image: © Space.com)

"Star Wars" is about to get the LEGO treatment. Disney XD is planning to air "LEGO Star Wars: Droid Tales" later in 2015, according to a report from the Hollywood Reporter. The five-episode series will act as a re-telling of the six "Star Wars" films from the mechanical eyes of C-3PO and R2-D2.

"Set after the Rebel Alliance victory on Endor seen at the end of 'Return of the Jedi,' the droids are regaling the assembly with their adventures that led them to their present situation," The Hollywood Reporter wrote in a description of the new show. "An accidental kidnapping leads to a new adventure that progresses to the retelling of the saga in chronological order, from 'The Phantom Menace' to 'Return of the Jedi.'"

It's good timing for Disney too. The new J.J. Abrams-directed "Star Wars: The Force Awakens" movie is set to hit theaters on Dec. 18. The new "Star Wars" movie is set 30 years after the end of "Return of the Jedi" and many of the original cast members are returning for the new film.