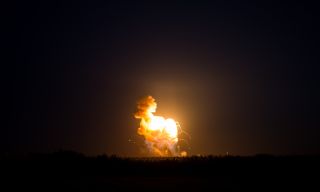 People who live near the Virginia site where a private Antares rocket crashed and burned Tuesday (Oct. 28) should take special care to avoid contacting any of the booster's remains, NASA officials warn.

The rocket, built by Orbital Sciences Corp., exploded in a massive fireball just seconds after blasting off from NASA's Wallops Flight Facility on Virginia's Wallops Island Tuesday evening, scattering debris over a wide area. This debris could be contaminated with rocket fuel or other hazardous material and should thus not be touched, NASA officials said.

"There may be a possibility of debris washing up onto some of the beaches, into some of the areas surrounding the island," Wallops director Bill Wrobel said during a post-crash news conference Tuesday night. "If people do find any debris, or anything that might be suspect — something that doesn't look familiar — we would ask that you stay away from the area and please call our incident response team." [See photos of the Antares rocket explosion]

The two-stage Antares rocket was supposed to launch Orbital Sciences' unmanned Cygnus capsule toward the International Space Station on a cargo mission for NASA. Orbital holds a $1.9 billion deal to fly eight such missions for the space agency. The company has completed two of them without incident; Tuesday's liftoff would have kicked off mission number three, which aimed to send about 5,000 lbs. (2,268 kilograms) of food, scientific experiments and other gear to the orbiting lab.

The crash does not endanger the astronauts aboard the International Space Station, who have plenty of food, water and other critical supplies, NASA officials said. In addition, an unmanned Russian Progress spacecraft launched toward the station early Wednesday from Kazakhstan, carrying about 3 tons of cargo.

Nobody was injured in the Antares explosion, though it did cause some property damage on the south end of Wallops Island, Wrobel said.

Antares' first stage is fueled by liquid oxygen and kerosene. The kerosene likely burned off in the explosion, while the liquid oxygen will dissipate into the atmosphere, said Orbital executive vice president Frank Culbertson.

But the second stage contains potentially hazardous solid fuel that may have survived the blast, and the Cygnus spacecraft's hydrazine and nitrogen tetroxide fuel needs to be handled properly as well, Culbertson added.

"We highly encourage people not to try to enter this area or get close to it, either from the water or the land," he said during Tuesday's news conference. "And certainly don't go souvenir hunting along the beach."

Orbital Sciences isn't the only private company to hold a cargo deal with NASA. SpaceX signed a $1.6 billion contract to make 12 unmanned supply runs with its Dragon capsule and Falcon 9 rocket. SpaceX has successfully completed four of these missions to date.