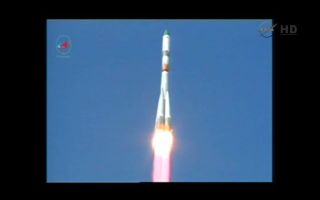 The robotic Progress 57 spacecraft blasted off from Baikonur Cosmodrome in Kazakhstan atop a Russian Soyuz rocket at 3:09 a.m. EDT (0709 GMT) to begin its space station mission. The spacecraft is carrying nearly 3 tons of supplies for the space station's Expedition 41 crew and is expected to link up with the orbiting lab at 9:09 a.m. EDT (1309 GMT).

Russia's successful Progress launch followed the disappointing failure of a U.S. commercial Antares rocket one day earlier. Built by the Virginia-based company Orbital Sciences Corporation, the Antares rocket exploded about 10 seconds after lifting off from its launch pad at NASA's Wallops Flight Facility on Wallops Island, Virginia. An investigation into the launch failure is ongoing.

"The crew of the International Space Station is in no danger of running out of food or other critical supplies," Bill Gerstenmaier, NASA's associate administrator for human exploration and operations, said in a statement.

In a press conference just after the Antares launch failure, NASA station program manager Mike Suffredini told reporters that the orbiting laboratory has enough supplies to sustain its crew through at least March 2015, even without the Progress 57 spacecraft launching today and a planned U.S. SpaceX Dragon capsule launch in December.

The Progress 57 cargo ship will orbit the Earth four times before arriving at the space station. You can watch the docking webcast live on Space.com, courtesy of NASA TV. The webcast will begin at 8:30 a.m. EDT (1230 GMT).