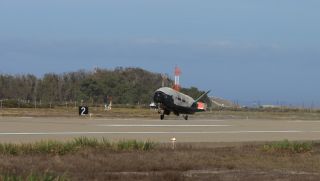 A U.S. Air Force X-37B space plane swoops down for a landing at Vandenberg Air Force Base in California on Oct. 17, 2014 after spending 22 months in space on a secret mission.The Boeing-built spacecraft launched on Dec. 11, 2012 and spent 674 days in space.
(Image: © Boeing)

"I'm extremely proud of our team for coming together to execute this third safe and successful landing," said Col. Keith Balts, commander of the 30th Space Wing, which is headquartered at Vandenberg, in a statement. "Everyone from our on-console space operators to our airfield managers and civil engineers take pride in this unique mission and exemplify excellence during its execution." [See photos from the X-37B mission]

Just what the space plane was doing up there for so long remains unclear; details about X-37B missions — including the payloads carried to orbit — are officially classified.

The X-37B looks like a miniature version of NASA's now-retired space shuttle. Like the shuttle, the robotic space plane launches vertically and glides back down to Earth for a runway landing when its time in space is done.

The Air Force owns two X-37B space planes, both of which were built by Boeing's Phantom Works division. These two solar-powered spacecraft have flown a total of three missions, which are known as OTV-1, OTV-2 and OTV-3. ("OTV" stands for Orbital Test Vehicle.)

The secrecy surrounding the X-37B and its missions has led to some speculation that the vehicle may be a space weapon, perhaps designed to capture or disable other nations' satellites. But the Air Force insists that this is not the case, stressing that the X-37B is merely a test bed for space tech.

"The primary objectives of the X-37B are twofold: reusable spacecraft technologies for America's future in space, and operating experiments which can be returned to, and examined, on Earth," Air Force officials wrote in on online X-37B fact sheet.

Experts generally agree with this assessment, saying the X-37B is not big or maneuverable enough to be a viable satellite-grabber.

‪"It was probably serving some sort of intelligence/surveillance/reconnaissance (ISR) function," Brian Weeden, a technical adviser with the Secure World Foundation and a former orbital analyst with the Air Force, said about OTV-3.

"And the secrecy surrounding the mission being performed by the X-37B suggests the mission was being done for the NRO, perhaps to test out and evaluate new sensor technologies or techniques," Weeden told Space.com via email, referring to the National Reconnaissance Office, which operates the United States' spy satellites.

"That means it wasn't collecting [information] on Russia, which is north of those latitudes," he said. "What does fall within the latitudes it covered are the Middle East, Afghanistan, Africa, Southeast Asia and Latin America, so its targets for collection were likely in those regions."