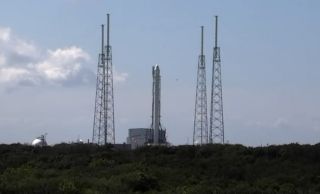 A SpaceX Falcon 9 rocket and its unmanned Dragon space capsule stand atop a launch pad at Cape Canaveral Air Force Station in Florida ahead of a planned Sept. 20, 2014 launch. The Dragon spacecraft is carrying 2.5 tons of cargo to the International Space Station for NASA.
(Image: © NASA)

CAPE CANAVERAL, Fla. — A privately built SpaceX Dragon capsule is counting down to launch a big haul of cargo for NASA early Saturday (Sept. 20), and you can watch the liftoff live online.

The SpaceX Dragon spacecraft is set to blast off from the Cape Canaveral Air Force Station here at 2:14 a.m. EDT (0614 GMT) on a delivery run to the International Space Station. A SpaceX-built Falcon 9 rocket will launch the Dragon capsule, which is loaded with about 2.5 tons of astronaut supplies, science experiments and other gear.

You can watch the launch attempt live on Space.com, courtesy of NASA TV. The live webcast will begin at 1 a.m. (0500 GMT). The launch may even be visible to observers along the U.S. Eastern Seaboard, depending on weather conditions.

Dragon will be carrying 5,170 lbs. (2,345 kilograms) of cargo, including some interesting new hardware and science experiments, such as first 3D printer built for space and a new rodent research habitat with an inaugural crew of 20 female mice. [See photos from the SpaceX-4 Dragon mission]

NASA and SpaceX mission managers are keeping a close eye on the weather for the early-morning launch, with forecasters predicting a 50-perfect chance storm clouds and rain could force a delay.

"The weather certainly does look interesting over the next several hours," Kathy Winters, a launch weather officer with the Air Force, told reporters here this morning (Sept. 19). "We're expecting to get some showers, some rain in the area this afternoon, possibly some isolated thunderstorms that could linger into the evening."

Winds are expected to nudge the worst weather offshore. But, as Winters said, "The question mark will be how much of that will wrap around into the coast."

If SpaceX is unable to launch Dragon in the next three days, the company would have to wait until Sept. 28 to make the delivery trip due to other traffic bound for the space station. A manned Russian Soyuz capsule carrying a new space station crew is scheduled to launch from Kazakhstan on Sept. 25.

Saturday's flight will be SpaceX's fourth official resupply mission. At this point, the resupply missions have become somewhat of a routine for SpaceX — but still a "cautious routine," said Hans Koenigsmann, vice president of mission assurance for the Hawthorne, California-based spaceflight company.

"I'm actually really excited," Koenigsmann said. "This is a very challenging mission in terms of cargo and in terms of experiments on board."

SpaceX founder and CEO Elon Musk has long maintained that developing a fully reusable rocket will lower the cost of launching vehicles into space. During SpaceX's last resupply mission back in April, the company achieved a major milestone on the road to making a reusable version of the huge Falcon 9 rocket that lofts Dragon into orbit. Usually the first stage of Falcon 9 splashes down into the sea after separation, but in April, it deployed a set of landing legs before it hit the water's surface and made an unprecedented controlled vertical landing in the Atlantic Ocean.

The Falcon 9 slated to launch Saturday isn't outfitted with landing legs, but the rocket will perform several burns to guide it through a soft landing in the ocean, Koenigsmann said. SpaceX officials don't expect to recover the first stage nor do they expect to see much of the nighttime test, though a telemetry boat will be nearby to collect data.

Once Dragon gets into orbit, it will spend two days chasing the space station. After about a month linked to the orbiting lab, the Dragon capsule will return to Earth for a splash landing in the Pacific Ocean. A SpaceX recovery crew will retrieve the capsule and return its cargo to NASA.

SpaceX is also building a manned version of Dragon to launch astronauts on round trips to low-Earth orbit. On Tuesday (Sept. 16), NASA picked SpaceX as one of two companies to fly American astronauts to the International Space Station by 2017. The other company selected was Boeing, which is developing its own space capsule called CST-100 to launch on Atlas 5 rockets.