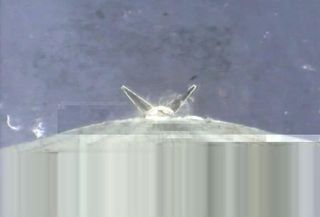 This is a cleaned up frame from the video captured by the boost stage of the Falcon 9 rocket that successfully splashed down in the Atlantic Ocean after launching to space. Elon Musk posted this photo on Twitter on April 29, 2014.
(Image: © SpaceX/Elon Musk Twitter)

The private spaceflight company SpaceX captured potentially amazing video of its unprecedented reusable rocket test this month, but representatives with the company need your help to clean up the grainy footage.

SpaceX launched its Falcon 9 rocket on April 18 to delivery a Dragon cargo capsule to the International Space Station. After sending Dragon on its way, SpaceX engineers successfully returned the landing leg-outfitted "boost stage" of the Falcon 9 rocket back to Earth's surface. You can watch the Falcon 9 reusable rocket test video on Space.com.

The rocket stage splashed down in the Atlantic Ocean and stayed upright before toppling over in the Atlantic, SpaceX representatives said. While the rocket stage was all but destroyed in rough seas after its ocean landing, SpaceX still recovered video of the test. The raw video is extremely grainy, but SpaceX is asking people around the world to help make the footage — captured by the onboard cameras of the Falcon 9 right before splashdown — clearer. [The Rockets and Spaceships of Spacex (Photo Gallery)]

"We welcome anyone to download the raw file to make improvements directly," SpaceX representatives wrote on the company's website. The spaceflight company also released a partially cleaned-up version of the video that shows a somewhat clear shot of the landing legs, but the footage is still grainy.

SpaceX is asking that anyone who is able to improve the video to post their work to Reddit at: http://www.reddit.com/r/spacex/comments/24bsn2/first_stage_landing_video/.

Musk also said that SpaceX could be able to land a rocket stage back on land sometime this year, and that may mean the private spaceflight company will re-fly a stage by 2015.

"If all goes well, I'm optimistic that we'll be able to land a stage back at Cape Canaveral by the end of the year," Musk said in April. "Assuming that happens, we should be able to re-fly the main boost stage sometime next year."

Reusable rockets have the potential to make the cost of spaceflight decrease dramatically, Musk has said. If reusable rockets become a sustainable reality, it could eventually reduce spaceflight transportation costs 100-fold, according to Musk.

Hawthorne, California-based SpaceX currently holds a $1.6 billion deal to fly 12 cargo missions to the space station with its Dragon capsule and Falcon 9 rocket. The mission launched on April 18 marks the company's third official supply run with the spacecraft and rocket. Dragon is currently attached to the space station.