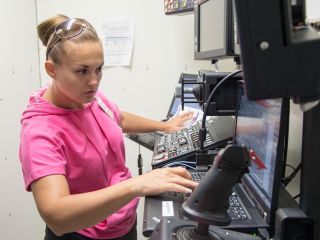 A Russian cosmonaut is poised to make a bit of history this when she launches to the International Space Station this month, even if she considers the mission a routine spaceflight.

When cosmonaut Elena Serova launches to the station on Sept. 25 with two other crewmates, she will become the International Space Station's first-ever female Russian crewmember and only the fourth female cosmonaut to reach space. She'll also be the first female Russian cosmonaut to fly in the 17 years since cosmonaut Yelena Kondakova's STS-84 space shuttle mission in May 1997.

But Serova, 38, said she doesn't see her mission any differently than that of a male cosmonaut.

"I wouldn't say I am doing more ... than what my colleagues are doing," she said in translated remarks during a preflight briefing at NASA's Johnson Space Center in Houston in July. [Women in Space: A Gallery of Firsts]

Serova pointed out that women have gone into space before, and that her focus is on fulfilling her assigned duties as a flight engineer.

"I want to perform my job really well," she said.

In 1963, Russia (then part of the Soviet Union) was the first nation to fly a woman in space, sending Valentina Tereshkova aloft in June of that year on a mission that lasted nearly three days in Earth orbit.

Svetlana Savitskaya was the second Soviet female cosmonaut, making two flights into space in 1982 and 1984 and staying aboard the Salyut 7 space station. She also was the first female to peform a spacewalk.

The United States didn't send its first woman to space until 1983, when Sally Ride blasted off. Dozens of women from the United States and other nations have flown since, but only one other from Russia: Kondakova. She made two trips to the Mir space station, in 1994 (on a Soyuz capsule) and 1997 (on a space shuttle).

Serova has said she's been fascinated by space since childhood, and that she always felt visiting the final frontier was possible. "The door to space was opened to all women by Valentina Tereshkova," she said in a NASA interview.