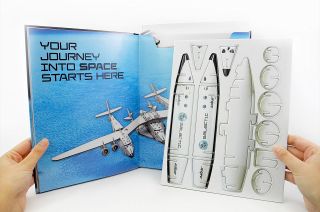 "Make Your Own SpaceShipTwo," one of seven new titles under a new partnership between Virgin Galactic and DK, includes pop-out parts to build a model of the commercial spacecraft.
(Image: © DK)

Virgin Galactic's SpaceShipTwo will soon launch onto — and, in at least one example, out of — the pages of seven books thanks to a partnership between the private spaceflight company and DK, a global publisher of illustrated reference books.

Virgin Galactic, founded by Richard Branson, announced on Tuesday (Aug. 5) the collaboration with DK as its latest merchandising and marketing deal intended to document and promote its commercial space tourism services.

"Human space flight has a universal capability to inspire and educate," George Whitesides, Virgin Galactic's CEO, stated. "Through Virgin Galactic's partnership with DK, we can creatively bring this powerful experience to life and to a global audience with an emphasis on beautiful images and one-of-a-kind storytelling." [Rise of SpaceShipTwo: Test Flight Photos]

Testing of Virgin Galactic's first SpaceShipTwo, the "VSS Enterprise," and its carrier aircraft WhiteKnightTwo ("VMS Eve") has been continuing towards an inaugural suborbital spaceflight planned for later this year. The company has said that its commercial passenger operations could begin flights as soon as 2015.

More than 700 people have paid as much as $250,000 to reserve one of the six seats aboard the spacecraft.

For just one ten-thousandth of that price, they, and everyone else will be able to build their own SpaceShipTwo, or rather a paper miniature, as one of the first products of the Virgin Galactic and DK partnership.

"Make Your Own Virgin Galactic SpaceShipTwo" is one of three new DK titles scheduled for release late next month. The 64-page hardcover will include 92 press-out parts that when pieced together using slots create a scale model of the SpaceShipTwo and its mothership, WhiteKnightTwo.

Fully assembled, the book's version of the Virgin Galactic vehicle will measure 27.5 by 15 inches (70 by 38 cm). The SpaceShipTwo and WhiteKnightTwo models are designed for display together or apart.

DK's flagship publication under the Virgin Galactic deal is also set for a Sept. 29 release.

The hardcover "Virgin Galactic: The Ultimate Experience" will take readers through each step of the journey planned for SpaceShipTwo passengers. The fully-illustrated family reference book covers the planned flights from rocketing to three times the speed of sound up to the edge of the atmosphere, to the somersaulting turn of zero gravity, and then the glide back to Earth.

"DK is thrilled to be working on this historic project" Simon Beecroft, DK's Director of Licensed Publishing, said. "We know that the appetite for information about our universe, space and Virgin Galactic's historic mission will appeal to readers of all ages."

"Our range of [new SpaceShipTwo] books will give readers unprecedented access to this ground-breaking initiative in the inimitable DK style," Beecroft said.

The remaining four titles in the seven book series are still to be announced. According to Virgin Galactic, the books will explore the importance of better access to space to the future of humanity, as well as profile the personalities and entrepreneurism that commercial spaceflight involves.

In addition to its partnership with DK, a division of Penguin Random House, Virgin Galactic has enter into exclusive arrangements with NBC Universal to televise its first flight to space and Land Rover to jointly-market their products and services.

Click through to collectSPACE.com for more images from the new Virgin Galactic books by DK Publishing.