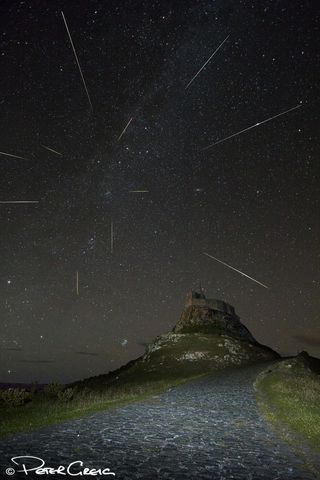 Each summer, amateur astronomers from all over the world look forward to observing the famous Perseid meteor shower, but often overlook six lesser celestial fireworks displays that reach their peak between July 28 and Aug. 20.

This year, a bright nearly-full moon will seriously interfere with Perseid meteor observing, so why not take this opportunity to try and view the other six, all but one of which will enjoy dark skies. That minor meteor shower sextet begins Monday (July 28), with the peak of the Delta Aquarid meteor shower.

The online Slooh community observatory will stream live views of the Delta Aquarids in a webcast Monday night (July 28) at 10 p.m. EDT (7 p.m. PDT/0200 GMT) featuring views from observatories in Arizona and the Canary Islands. NASA, meanwhile, will provide a follow-up webcast on Tuesday night via all-sky cameras at the agency's Marshall Space Flight Center in Huntsville, Alabama.

Both the Slooh and NASA webcasts are dependent on weather conditions at their respective observing sites. You can watch the Delta Aquarid meteor shower webcasts on Space.com each night.

In general, the Earth encounters richer meteoric activity during the second half of the year. And you're more likely to see twice as many meteors per hour in the predawn hours as compared to the evening hours, weather permitting.

This is due to the fact that during the pre-midnight hours we are on the "trailing" side of the Earth, due to our orbital motion through space. So any meteoric particle generally must have an orbital velocity greater than that of the Earth to "catch" us. [Amazing Meteor Shower Photos by Stargazers]

However, after midnight when observers are looking up from the Earth's "leading" side, any particle that lies along the Earth's orbital path will enter our atmosphere as a meteor. As such objects collide with the Earth's atmosphere at speeds of 7 to 45 miles per second (11 to 72 km/second), their energy of motion rapidly dissipates in the form of heat, light, and ionization, creating short-lived streaks of light popularly referred to as "shooting stars."

Summertime meteors, occasionally flitting across your line of sight are especially noticeable between mid-July and the third week of August. And between Aug. 3 and Aug. 15, there are no fewer than six different minor displays that are active. These six are listed in the table included in this guide.

The only equipment you'll need to see this summer's meteor showers are your eyes, a modest amount of patience, good weather and dark skies. The actual number of meteors a single observer can see in an hour depends strongly on sky conditions.

The rates given in the table are based on your ability to see stars as faint as magnitude +6.5 —considered to be the threshold of naked eye visibility — that you are an experienced observer, and an assumption that the radiant is directly overhead. The radiant is the place in the sky where the paths of shower members, if extended backward, would intersect when plotted on a star chart.

Your clinched fist held at arm's length is equal to roughly 10 degrees on the sky. So if the radiant is 30 degrees ("three-fists") above the horizon, the hourly rate is halved. At 15 degrees, it is cut to a third.

While the hourly rates from these other meteor streams are but a fraction of the numbers produced by the Perseids, combined, overall they provide a wide variety of meteors of differing colors, speeds and trajectories.

Among these are the Southern Delta Aquarids, which can produce faint, medium speed meteors; the Alpha Capricornids, described as "slow, bright, long trailed yellowish meteors" and the Kappa Cygnids which are classified as "slow moving and sometimes producing brilliant flaring fireballs." As such, if you stay out and watch long enough, you may be nicely rewarded for the time spent.

Note that five of the six showers listed in chart included in this guide, come from the region around the constellations of Aquarius and Capricornus. These constellations are currently highest in the southern sky between roughly 1 and 3 a.m. your local time.

As for the Kappa Cygnids and Northern Iota Aquarids, the moon will be waning in illumination, but will still shine at a relatively bright gibbous phase, which will unfortunately brighten the predawn morning sky.  Of these six minor showers, the Kappa Cygnids are the most favorably placed for northern observers. The constellation Cygnus lies high overhead at around midnight making it favorably placed for viewing all night long.

Editor's note:If you capture an amazing photo of a Delta Aquarid meteor, or any other shooting star display, and would like to share it with Space.com for potential story or image gallery, send images and comments in to managing editor Tariq Malik at: spacephotos@space.com.