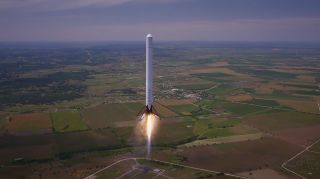 The future of United States space travel will involve significant governmental cooperation with private industry, according to a panel of spaceflight experts.

Government contracts with aerospace firms have changed the face of spaceflight in the United States. NASA officials hope to start using privately built spaceships to ferry astronauts to and from the International Space Station by 2017, and two companies (SpaceX and Orbital Sciences Corp.) already fly robotic vessels full of supplies to the orbiting outpost.

"This is no longer your grandfather's space program," Darrell West, vice president and director of governance studies at the Brookings Institution, said during a panel he moderated today (May 14). "Increasingly, we are seeing commercial firms launch satellites, supply the International Space Station or even offer the prospect of space tourism in the near future." [The Rockets and Spaceships of SpaceX (Photo Gallery)]

SpaceX engineers have been working for years to develop a fully and rapidly reusable rocket stage. The spaceflight firm recently soft-landed the first stage of its Falcon 9 rocket in the ocean after launching it to space. But Antonio Elias, the executive vice president and chief technical officer at Orbital Sciences, thinks that developing reusable rockets might not be the best use of resources without plenty of launches to support it.

"If the absolute elasticity of demand for launch and price is sufficiently high and if SpaceX is able to go to 50 or 60 flights a year, their efforts in reusability will pay off handsomely," Elias said during the Brookings Institute panel discussion. "But if it falls short of 50 to 60 a year, it's going to be wasted money."

"3D printing is a major advancement that SpaceX is trying to use to lower the cost of building, lower the cost of research and development," Harris said. "This is an advanced way of doing 3D printing. It's with metal and it's with better metals. A lot of the 3D printing technology relies on plastics and other ways of doing it."

On the scientific side of the coin, Mars should be an exploration goal for scientists in the future, said Michael Meyer, lead scientist for NASA's Mars exploration program. NASA's Mars rover Curiosity has confirmed that the Red Planet could have been habitable in the distant past, and further study is needed to understand whether life did exist on Mars.

Other bodies in the solar system are also worth investigating, experts said.

"As far as I'm concerned, 2015 is the year of the dwarf planets because we have two missions out there," said Nadine Barlow, a professor of physics and astronomy at Northern Arizona University. "One [NASA's Dawn mission] is on its way to Ceres, which is the largest asteroid in the asteroid belt, but is also known as a dwarf planet."

The second big mission is NASA's New Horizons mission scheduled to arrive in the Pluto system next year, she added.

Jupiter's icy moon Europa has a liquid water ocean underneath its ice shell that might be able to host life. NASA is currently looking into a Europa mission that could help scientists understand whether the moon could harbor life.

You can listen to the full two hour discussion via Brookings: http://www.brookings.edu/events/2014/05/14-future-us-space-program