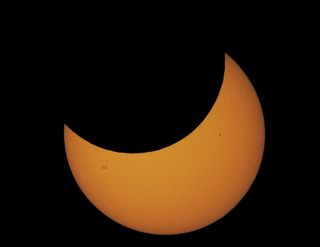 The annular solar eclipse of April 28-29, 2014 will be visible as a partial solar eclipse from parts of Australia and southern Indonesia, weather permitting, as shown in this illustration.
(Image: © Space Telescope Science Institute)

Editor's update (April 28): The first solar eclipse of 2014 will be webcast live for observers who can't witness it firsthand in Australia. To follow the webcasts, visit: Solar Eclipse Webcasts by Slooh, Virtual Telescope Project

The moon will blot out the sun in the first solar eclipse of the year on Tuesday (April 29). While partial views of the celestial shadow play will be visible across Australia, only penguins a bit farther south are in the right spot to see the most dramatic phase of the event: a "ring of fire" effect of the moon silohuetted by the sun.

Tuesday's sun show is known as an annular solar eclipse, an event in which - at its best - the moon is outlined by a dazzling ring of sunlight when it blocks most, but not all, of the sun. But during Tuesday's eclipse, that so-called "ring of fire" is only visible from an uninhabited stretch of Antarctica. So partial views from other locales are the best eclipse chasers can see.

Weather permitting, Australians will see the moon cover about 65 percent of the sun's disk in a partial solar eclipse, which will be visible shortly before sunset in Melbourne and Sydney and earlier in the afternoon in Western Australia. You can watch two webcasts of the solar eclipse here beginning at 2 a.m. EDT (0600 GMT) on Tuesday, courtesy of the Slooh community telescope and Virtual Telescope Project. ['Ring of Fire' Solar Eclipse of April 29, 2014 (Visibility Maps)]

A small part of Antarctica, however, will witness an annular eclipse, in which the moon blocks out most of the sun but leaves a spectacular "ring of fire" blazing in the sky. (Annular eclipses occur when the moon is relatively far from Earth in its elliptical orbit around our planet; if the moon were closer, it would be big enough in the sky to cause a total solar eclipse.)

Annular and total solar eclipses both occur, on average, about once every 18 months. Tuesday's event comes nearly a year after a stunning ring of fire eclipse over Australia that enthralled skywatchers on May 10, 2013.

WARNING: Solar eclipses are potentially dangerous skywatching events. Never look directly at the sun during an eclipse with a telescope, binoculars or your unaided eye; severe eye damage can result.

To observe the eclipse safely, you can buy special solar filters to fit over your equipment, or wear No. 14 welder's glass over your eyes. You can also use your telescope, or one side of your binoculars, to project an image of the eclipse onto a shaded white piece of paper or cardboard. (But make sure nobody looks through the telescope or binoculars while you do this.)

Tuesday's eclipse will begin at 1:15 p.m. local time in Perth, the capital of Western Australia, and end at 3:59 p.m. Maximum coverage there will come at 2:41 p.m., when the moon will obscure about 65 percent of the solar disk. Webcasts from Australia will begin at 2 a.m. EDT due to the time zone difference.

The event will begin later in the day for observers in Melbourne (3:58 p.m. local time) and Sydney (4:13 p.m.). In both cities, the sun will set before the solar eclipse is over.

"This eclipse is rare in that the cone of the moon's shadow doesn't quite reach the Earth, passing just over the South Pole, with a bit of the annular (ring) eclipse barely visible on a small region of the South Pole," said astronomer Jay Pasachoff of Williams College, who has observed 58 solar eclipses and is in Australia to see this one.

"There is an 18-year, 11 1/3-day period called the saros over which similar eclipses repeat," Pasachoff told Space.com via email. "So this type of 'rare' isn't particularly good or important; it is just unusual to see the first eclipse in a saros series."