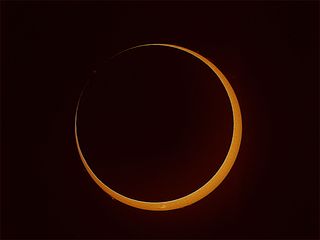 The moon blocked out part of the sun on Friday in a dazzling "ring of fire" solar eclipse that amazed lucky observers around the world, from Australia to Hawaii.

The annular solar eclipse was best seen in remote parts of western Australia, where the moon covered most — but not all — of the sun, leaving a spectacular ring of light around the lunar silhouette. Because the eclipse's path crossed the International Dateline, it began in Australia on Friday, May 10, local time, but ended late Thursday, May 9.

"For the three of us here this was our first solar eclipse, we have done many lunar eclipses, but this was just spectacular!" Michael Johnson of Columbus State University's Coca-Cola Space Science Center told SPACE.com in an email from Coen, Australia, where his team provided a live webcast of the entire solar eclipse. "During the maximum eclipse it was hard not to just stare at the sun (something we had told everyone online and at the site not to do several times)." [See photos of 2013's amazing 'Ring of Fire' Solar Eclipse]

Annular solar eclipses are odd celestial events in which the moon passes between Earth and the sun, but is just a bit too far from Earth to completly block out the star, as it does in a total solar eclipse. The result: The moon covered about 95 percent of the sun, casting a shadow on the Earth visible from space to satellites.

Eclipse views from Australia to Hawaii

Only observers along a slender path across Western Australia and some South Pacific islands were in the right position to observe the entire solar eclipse. Some skywatchers, like those in Hawaii, were able to see a partial solar eclipse.

Eclipse watcher Sarah Smigal on Honolulu said she used a child's solar filter to safely photograph the sun using a Nikon d3100 camera and a zoom lens. Her photos clearly show the moon taking a "bite" out of the sun.

In the neighboring island of Oahu, observer Kalani Pokipala captured a partial view of the solar eclipse from East Honolulu by photographing the event through an Orion telescope equipped with a welder's glass filter attached for safety. The filter gave the sun an eerie, greenish hue. Pokipala also projected the eclipse onto a piece of cardboard so others could view it safely.

But the main event, the "ring of fire" created at maximum eclipse, was what floored most observers.

Astronomer Jay Pasachoff of Williams College led a 10-person expedition to a spot about 62 miles (100 kilometers) north of Tennant Creek in Australia's Northern Territory. The team hoped to use the eclipse for solar science observations.

"We can report good success in observing 4 minutes, 20 seconds of annularity at the eclipse today," Pasachoff told SPACE.com in an email report. [Watch: Video of the 'Ring of Fire' Solar Eclipse]

Pasachoff said the team had to wait out some clouds that threatened to interfere with their observations.

"The clouds thinned considerably before annularity, which was observed in pretty clear sky," he added. "The air cooled noticeably when the sun was almost entirely covered, and the shadows sharpened because they were being cast by a thin crescent of sun."

"Wow! That was an amazing event," Slooh President Patrick Paolucci told SPACE.com. Paolucci said Slooh had hoped to provide three views of the eclipse from different spots in Australia, but one feed experienced technical glitches while a health issue on site prevented the other.

"The feed in Queensland at a local high school was a bummer - they had over 300 school kids attending the live event - we had a bunch of stuff planned, but the bandwidth at the school overloaded and completely dropped - they never could broadcast," Paolucci said.

The May 9-10 eclipse marked the first solar eclipse of 2013 and came on the heels of an April 25 partial lunar eclipse visible from parts of Africa, Asia and Australia. Another minor lunar eclipse will occur on May 25, followed by a third on Oct. 18.

"We now look forward to the next total eclipse of the sun, which will be visible from Gabon, Africa, on November 3," Pasachoff said. "Another annular eclipse, on April 29, 2014, will have its annularity visible only from an inaccessible ocean spot off Antarctica, but Australia will see about 60% coverage."

But for some observers, just catching a moment when the moon and sun align can be amazing.

Amateur astronomer Robert White, who lives in north Queensland, grabbed his Fuji Finepix digital camera to photograph the eclipse as soon as he heard it was happening.

"I observed it through clouds that were passing through the area in our backyard," White told SPACE.com in an email. "I had been getting my son ready for school and was listening to the TV when they said the eclipse was happening."

White had protective lenses and glasses left over from the total solar eclipse of November 2012, which was also visible from Australia, so he grabbed them and went outside to take a look.

"This one wasn’t quite to par as that one, but it was still a great thing to view," White said. "To feel the dilution of light as the moon passed in front is almost and indescribable feeling."

Editor's note: If you lived in the observing area of this week's solar eclipse and safely snapped an amazing picture of the sun that you'd like to share for a possible story or image gallery, send photos, comments and your name and location to managing editor Tariq Malik at spacephotos@space.com.