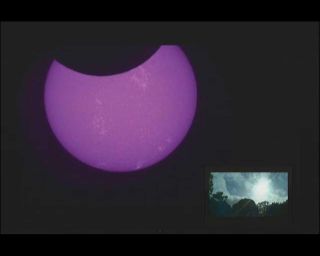 The potentially amazing solar eclipse that will turn the sun into a "ring of fire" is under way for those able to view it in person.

Weather permitting, observers in western Australia should be getting their first glimpses of the celestial show right now as the sun rises above the horizon.

If you don't happen to live in that part of the world, you can watch two live webcasts of the solar eclipse on SPACE.com. One is courtesy of the online Slooh Space Camera and the other is provided by the Coca-Cola Space Science Center.

"We have multiple feeds set-up, so weather permitting, we should have some nice looks," Slooh president Patrick Paolucci wrote in an email. "We will be on air for at least a few hours." [See Amazing Photos of an Annular Solar Eclipse in 2012]

An annular solar eclipse occurs when the moon passes between the Earth and the sun, casting a shadow on the planet. The moon still appears smaller than the sun in the sky, giving the eclipse its distinctive ring shape.

About 95 percent of the sun is covered during the eclipse, but the sky will not be noticeably darker. For this reason, it's important to use special protective eyewear or other methods of shielding to safely observe the eclipse in person.

The path of annularity will lead the eclipse through Australia and into Papua New Guinea. The Solomon Islands, Gilbert Islands and other parts of the Pacific Ocean also lie in the 8,264 mile (13,300 kilometer) track of the eclipse. In total, this eclipse will cover about 0.5 percent of the Earth's surface area, according to NASA officials.

Although this is the first solar eclipse of 2013, it is not the last. A rare hybrid solar eclipse — when an annular eclipse transitions into a total eclipse — will be seen in the northern Atlantic Ocean and into equatorial Africa on Nov. 3.

You can watch the webcast directly from Slooh's iPad app or the group's website: http://events.slooh.com/

You can also watch the CCSSP webcast directly from the organization's website: http://www.ccssc.org/webcast/eclipse2013.html

WARNING:Never look directly at the sun during an eclipse with a telescope or your unaided eye. Severe eye damage can result and scientists use special filters to safely view the sun.

Editor's Note: If you live in the observing area of today's solar eclipse and safely snap an amazing picture of the sun that you'd like to share for a possible story or image gallery, send photos, comments and your name and location to Managing Editor Tariq Malik at spacephotos@space.com.