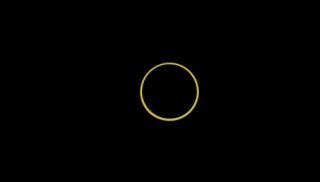 The first solar eclipse of 2013 occurs today and will transform the sun into a dazzling "ring of fire" for observers in Australia, weather permitting. But eclipse chasers in Hawaii and other parts of the Pacific region will get a treat, too: a partial solar eclipse.

For today's annular solar eclipse, the long umbral shadow cone of the moon is too short to reach the Earth. In angular size, the moon's disk appears about 4.5 percent smaller than the disk of the sun, so the effect is like placing a penny atop a nickel — a ring of sunlight remains visible around the moon.

The shadow path from where the ring can be seen runs for thousands of miles, but will get no wider than 107 miles (172 kilometers) at the point of greatest eclipse. Much of the path falls over the Pacific Ocean, but at or soon after local sunrise it will slice across a part of northern Australia and the extreme eastern tip of Papua New Guinea and some of the nearby Solomon Islands. At the point of greatest eclipse, the ring phase will last 6 minutes 4 seconds. [Amazing 'Ring of Fire' Solar Eclipse Photos from 2012]

You can watch the solar eclipse live on SPACE.com, courtesy of the online Slooh Space Camera, beginning Thursday at 5:30 p.m. EDT (2130 GMT).

Aside from the regions in the path of greatest eclipse, the rest of Australia, Tasmania and most of New Zealand (save for a southern and eastern slice of the South Island) will see varying degrees of a partial solar eclipse during the morning hours Friday (May 10). A large swath of the Pacific Ocean also falls underneath the penumbral shadow, so that most of the islands that comprise Micronesia, Melanesia and Polynesia will also see varying degrees of a partial eclipse.

Places to the west of the International Date Line will see it during Friday morning, while places to the east of the Date Line see it during Thursday afternoon (May 9). So, here we have a case of a solar eclipse that will start on May 10 … but will end on the previous day!

Hawaii falls into this latter category. It is the only U.S. state from which today's solar eclipse will be visible.

Weather permitting, eclipse observers in the 50th U.S. state will see the moon reach almost across halfway across the sun's diameter today in the mid-to-late afternoon hours.

Eclipse view from the Aloha State

The spectacle of a partial solar eclipse is usually pooh-poohed by professional astronomers because it lacks the drama and beauty of a total solar eclipse. Yet, a partial eclipse of the sun affords many people the opportunity of viewing firsthand the dark disk of the moon crossing in front of the sun.

In his book "Eclipse!" (John Wiley & Sons, Inc., 1997), author Philip Harrington noted that "A partial eclipse, whether or not it leads to totality or annularity, offers a wonderful opportunity to experience the magic of astronomy."

From Honolulu, the partial solar eclipse will begin at 2:22 p.m. local time. If the sun were the face of a clock, the moon would appear to take its first "bite" out of the sun at the 7 o'clock position.  Maximum eclipse will come at 3:47 p.m. when the moon will obscure 32.2 percent of the sun.

One word of caution — be very, very careful about the precautions for eclipse viewing. Never look at even a tiny bit of the sun’s disk unless you are using a proper filtration device like #14 welder’s glass or aluminized Mylar plastic to protect your eyes! You can get all the safety tips here.

Joe Rao serves as an instructor and guest lecturer at New York's Hayden Planetarium. He writes about astronomy for Natural History magazine, the Farmer's Almanac and other publications, and he is also an on-camera meteorologist for News 12 Westchester, New York. Follow us @Spacedotcom, Facebook and Google+. Original article on SPACE.com.