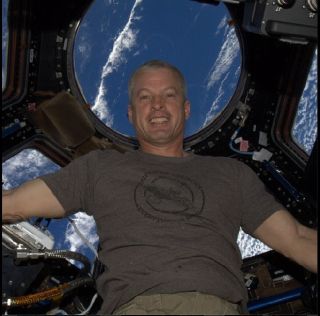 An astronaut on the International Space Station recently made a giant leap into the social media world with the first Instagram photo beamed down from space.

NASA astronaut Steve Swanson posted a selfie taken in the station's cupola — a large, multi-sided window that faces Earth — as the first Instagram photo sent from space. The photo posted to the station's Instagram account (ISS) on April 7, and since then, it has garnered nearly 4,000 "likes."

"Back on the ISS, life is good," Swanson wrote in an image caption. The veteran astronaut flew to space before during two previous space shuttle missions.

In the photo, Swanson is wearing a shirt featuring a spaceship from one of his favorite TV shows, "Firefly" — a short-lived show about a crew of space cowboys that traverse the universe looking for smuggling work where they can get it. Swanson brought a box set of "Firefly" DVDs up to the station during one of his previous space shuttle missions.

Since Monday, Swanson has beamed back two more photos from the station. One image shows the northern lights glowing green above Europe and the other, posted Wednesday (April 9), is a photo of Swanson going through some medical testing aboard the orbiting outpost.

Astronauts have a history of social media use while in space. NASA's Mike Massimino became the first person to use Twitter in space when he posted: "Launch was awesome!! I am feeling great, working hard, & enjoying the magnificent views, the adventure of a lifetime has begun!" from his account @Astro_Mike in 2009.

Since then, other astronauts have followed suit. Canadian astronaut Chris Hadfield sent informational videos and tweets down from the station during his time onboard. He even made a music video using David Bowie's "Space Oddity" that gained popularity after it was posted right before he flew back to Earth.

"We're constantly looking to expand our social media portfolio to include tools that will best tell NASA's story of exploration and discovery," said NASA spokesperson Lauren Worley said in a statement in September 2013. "Instagram has a passionate following of users who are hungry for new and exciting photos."