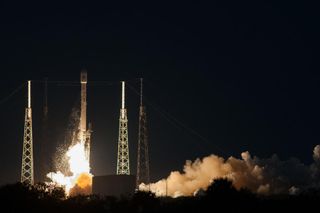 A SpaceX Falcon 9 rocket lit up the night sky over Florida Tuesday (Dec. 3) in a landmark communications satellite mission that catapulted the private spaceflight company into the commercial launch business.

The upgraded Falcon 9 rocket launched into space from SpaceX's pad at Cape Canaveral Air Force Station in Florida on a mission to deliver the 3.2-ton SES-8 communications satellite into orbit. The liftoff at 5:41 p.m. EST (2241 GMT) marked SpaceX's first entry into the large commercial satellite market and its first launch into a geostationary transfer orbit needed for such a mission.

The launch also marked the first flight of SpaceX's enhanced Falcon 9 v1.1 rocket from Florida and came after two aborted attempts last week due to technical glitches, making the third time the charm for the upgraded rocket design. [See photos of SpaceX's Falcon 9 launch of the SES-8 satellite]

Another major milestone for SpaceX occurred 27 minutes after liftoff, when the two-stage Falcon 9 rocket reignited its second stage for a maneuver that delivered the SES-8 satellite into its intended orbit. An attempt to perform the maneuver during a September test flight of the upgraded Falcon 9 failed due to a frozen igniter fluid line, a glitch SpaceX engineers fixed with the addition of insulation to the affected system.

The 6,918-lb. (3,138 kilograms) SES-8 satellite was placed in a transfer orbit that ranges between 183 miles (295 kilometers) above Earth at its nearest point and 49,709 miles (80,000 km) at its highest point. The satellite is a hybrid Ku-and Ka-band spacecraft built to provide high-definition telecommunications services to SES World Skies customers across the South Asia and Pacific region.

The smooth launch is a landmark achievement for SpaceX's plans to provide reliable and affordable launch services to commercial satellite operators and government space agencies.

SpaceX has already demonstrated the dependability of its baseline Falcon 9 rocket with the repeated launch success of its unmanned Dragon space capsule. Today's mission marked SpaceX's seventh Falcon 9 launch since 2010, all of them successful.

But to launch commercial satellites, SpaceX upgraded the 224.4-foot (68.4 meters) Falcon 9 rocket to boost its capabilities. The rocket's nine-engine first stage was modified with new SpaceX Merlin 1D engines that provide more thrust than their predecessors. The rocket has a larger 17-foot (5.1 m) payload fairing to fit even the largest satellites inside, and boasts a triple redundant avionics system for reliability, company officials said.

The first Falcon v1.1 launched on Sept. 29 from SpaceX's pad at Vandenberg Air Force Base in California on a mission that successfully carried the CASSIOPE space weather tracking satellite into orbit for the Canadian Space Agency.

SpaceX engineers also changed the configuration of the first-stage engines, which were in a three-by-three block, into a circular "Octaweb" pattern with eight engines encircling the ninth to increase reliability and streamline its manufacturing process, company officials said.

SpaceX has also outfitted the upgraded Falcon 9's first stage with heat shielding and a restart capability as part of its ongoing project to develop a completely reusable rocket launch system.

"We've done everything we can think of to maximize the reliability of this launch system," Musk told reporters on Nov. 24, one day before the first launch attempt. "We're really happy with this rocket design, and it's an incredibly capable vehicle."