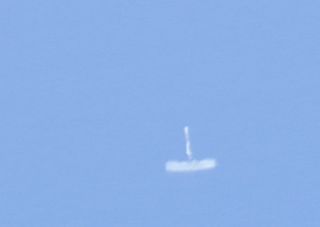 The first stage of SpaceX's Falcon 9 v1.1 rocket comes down to Earth after its maiden launch on Sept. 29, 2013. Engineers managed to re-light the first stage engines twice as part of a reusability test.
(Image: © SpaceX)

SpaceX managed to re-light the next-generation Falcon 9's nine-engine first stage twice during the Sept. 29 test flight from Vandenberg Air Force Base in California, easing the stage's return to Earth over the Pacific Ocean.

"For the first restart burn, we lit three engines to do a supersonic retro propulsion, which we believe may be the first attempt by any rocket stage," SpaceX officials wrote in an update Monday (Oct. 14). "The first restart burn was completed well and enabled the stage to survive re-entering the atmosphere in a controlled fashion."[SpaceX's Next-Gen Falcon 9 Rocket Soars on 1st Flight (Photos)]

Engineers ignited a single engine during the second re-light. This operation also went well, officials said, though the first stage began rolling too much to make a soft splashdown in the Pacific.

"This particular stage was not equipped with landing gear which could have helped stabilize the stage like fins would on an aircraft," SpaceX officials wrote. "The stage ended up spinning to a degree that was greater than we could control with the gas thrusters on board, and ultimately we hit the water relatively hard."

The rocket, known as the Falcon 9 v1.1, carried Canada's CASSIOPE space-weather satellite and three smaller spacecraft to orbit during the Sept. 29 flight. The reusability test was always viewed as a secondary objective, and one that stood little chance of succeeding completely, officials said.

"It is important to note that this is not a priority for this flight, and SpaceX does not expect success with this first test," SpaceX spokeswoman Hannah Post told SPACE.com before the launch.

SpaceX was founded in 2002 by billionaire entrepreneur Elon Musk, who has said that a chief goal of the company is developing a fully reusable launch system. Doing so could reduce the cost of spaceflight by a factor of 100, Musk has said.

Toward this end, the company has been testing a reusable rocket prototype called Grasshopper, which has been making higher and more complex test flights over the past year.

"SpaceX recovered portions of the [Falcon 9 v1.1's first] stage and now, along with the Grasshopper tests, we believe we have all the pieces to achieve a full recovery of the boost stage," they wrote in the Oct. 14 update.