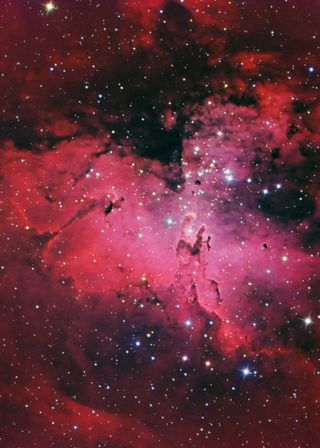 Terry Hancock took this image of the Pillars Of Creation located within the Eagle Nebula (Messier 16 or NGC 6611) in late August and early September from DownUnder Observatory in Fremont, Mich. He used a QHY9 monochrome CCD camera with Astronomy Technologies Astro-Tech 12" f/8 Ritchey-Chrétien astrograph optics in RGB and H-Alpha. The total exposure time was 5 hours.
(Image: © Terry Hancock)

An amateur astronomer has captured an eye-catching view of one of the most famed cosmic sights: the so-called "Pillars of Creation" of the Eagle Nebula.

Astrophotgrapher Terry Hancock sent SPACE.com his new view of the iconic "Pillars of Creation" structure, which is located in the Eagle Nebula. It is the same region immortalized by dazzling images from the Hubble Space Telescope.

Located 6,500 light-years away from Earth in the constellation Serpens, the Eagle Nebula (Messier 16 or NGC 6611) is a stellar nursery comprising interstellar gas and dust. Astronomers believe the aptly named columns featured in this image may have been blasted out of existence thousands of years ago.

Astrophotgraphers, stargazers and astronomers will be able to view these celestial pillars for at least another few hundred years because light takes roughly 6,500 years to reach Earth and telescopes today reveal the region as it existed long ago, according to European Space Agency officials.