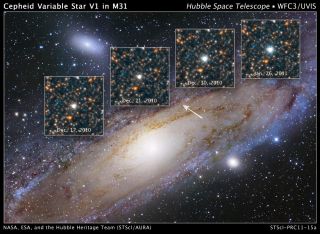 Hubble variable number one, or V1, and resides two million light-years away in the outer regions of the neighboring Andromeda galaxy, or M31. The star helped Edwin Hubble show that Andromeda lies beyond our galaxy, radically changing our view of the universe permanently.
(Image: © NASA, ESA, and the Hubble Heritage Team (STScI/AURA))

Standing high in the northern part of the sky this week at around 11 p.m. local time is a spire-like figure of five stars pointing northward.

This is the constellation of Cepheus, the King of Ethiopia. Rather than a king, he seems to resemble a church with a steeple or perhaps an Alpine ski lodge with a steep, snow-shedding roof that appears upside down this time of year.

At the southernmost point of the spire, represented in most allegorical star pictures as the bicep of the King's arm holding a scepter is the star Delta Cephei, the most celebrated of the class of variable stars known as the Cepheids. [Amazing Night Sky Photos by Stargazers: September 2013 (Gallery)]

Delta is an ever-changing star that forms a little triangle with two other nearby stars.

Delta's rise to maximum takes place in only about a day and a half while its fall to minimum light occurs over the course of about four days. Eminent British amateur astronomer, John Goodricke first noticed the star's strange variability in brightness in 1784. Thanks to such a rapid variation, virtually anyone who carefully monitors Delta from night to night can watch the star's brightness fluctuate.

At first it was assumed that Delta Cephei belonged to a special class of stars known as an eclipsing binary. Goodricke himself proposed to the Royal Society in 1783 that the star Algol in the nearby constellation of Perseus was just such a star and he turned out to be right. Similarly, it was initially thought that Delta also had a much fainter, unseen companion circling it.  When this supposed fainter star passed in front of the brighter one, Delta would seem to dim and after the fainter star moved away, Delta would brighten up again.

However, one vexing problem in accepting this theory was that while the star did appear to dim, it also seemed to change color: turning bluer when it brightened and redder when it faded.

Eventually, the theory that Delta Cephei was an eclipsing binary was shelved when calculations indicated that the supposed fainter companion — if it really existed at all — had to be revolving inside the brighter one.

The accepted explanation for Delta Cephei's fluctuations in brightness, today is that this star pulsates like the beating of a heart, expanding, contracting, and expanding again in perfect time.

Such pulsating stars brighten and fade as they contract and expand. Cooled by expansion, they turn redder and fainter; heated by compression they turn bluer and brighter. As such, this star belongs to a remarkable class that called the Cepheids. Indeed, this star has given its name to literally hundreds of other variables,

These kinds of stars come in two types. Type I Cepheids fluctuate in cycles in less than a day and are found in globular star clusters. Type II are referred to as "classical" Cepheids and are more luminous.

Type II Cepheids can be observed at tremendous distances, even in other galaxies. Their steady and rhythmical cycles are known with great precision, running from about two to 50 days, while in most cases their brightness change is less than one magnitude.

Delta Cephei is a Type II Cepheid. It has a period of five days 8 hours 47.5 minutes and it appears to vary in magnitude between 3.6 and 4.3. It's approximately 2,000 times more luminous than the sun and is 880 light-years away. It is among the closest stars of this type to the sun, with only Polaris being nearer.

In 1912, Henrietta Swan Leavitt (1868-1921) of Harvard was studying Cepheid variables in the Small Magellanic Cloud, a satellite galaxy of the Milky Way. She listed 25 in order of period and found that they were also ordered according to brightness, a discovery of great importance — determining the period gives the star's true brightness.

There is a close relationship between the period and intrinsic brightness of a Cepheid — the longer the period, the greater the star's luminosity.  [See Stunning Photos of Our Milky Way Galaxy]

This relationship between a Cepheid variable star's pulsation rate and the change in its observed luminosity has allowed astronomers to use these stars as "celestial yardsticks" to measure stellar distances, even if the star in question is located in a distant galaxy.

An astronomer need only determine a Cepheid's period and apparent magnitude. The former value then gives scientists the star's absolute magnitude — how bright that star would appear if it were placed at a standard distance of 32.5 light-years.

By comparing its apparent and absolute magnitudes it is then easy to calculate the star's distance, which in turn gives the distance of the galaxy in which it is located.

The universe doubles in size

Hubble eventually determined that the star's period and absolute magnitude and in 1929 announced that the galaxy was 900,000 light-years away. This value stood until a German astronomer, Walter Baade made the discovery that there were two types of Cepheid variable stars, and that Hubble was comparing a more luminous Type II Cepheid in Andromeda with a dimmer Type I Cepheid in our own galaxy.

This discovery led Baade to recalculate the distance of the Andromeda galaxy, doubling the previous calculation made by Hubble and placing it at approximately 2 million light-years away.

With this discovery, the size of the known universe doubled literally overnight. Baade announced this finding to considerable astonishment at the 1952 meeting of the International Astronomical Union in Rome.

Editor's note: If you snap an amazing photo of Delta Cephei — or any other night sky sight — and would like to share it with SPACE.com for a possible story or photo gallery, please send images and comments, including name and equipment used, to managing editor Tariq Malik at: spacephotos@space.com.