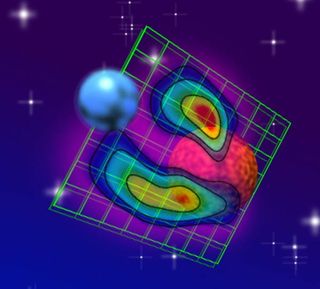 Astronomers have detected a giant magnetic loop sweeping outfrom a pair of binary stars in the Milky Way.

"This is the first time we've seen a feature like thisin the magnetic field of any star other than thesun," said William Peterson of the University of Iowa.

The stellar pair, called Algol, includes a star about three times more massivethan the sun along with a less-massive companion. The two lie about 93light-years away from Earth. They have been known since ancient times as "The Demon Star"because they appear as one object that blinks on and off ? a phenomenon caused whenone star passes in front of the other.

Within the binary, the smaller star orbits the larger at a distanceof 5.8 million miles, only about 6 percent of the distance between Earth andthe sun.

The newly discovered magnetic loop emerges from the poles ofthe mini star and stretches outward in the direction of the primary star. Asthe little star orbits, one side ? the side with the magnetic loop ? constantlyfaces its companion, just as the same side of our moon always faces the Earth.

Algol, in the constellation Perseus, is visible to the nakedeye and well-known to amateur astronomers. As seen from Earth, the two stars regularlypass in front of each other, causing a notable change in brightness. The paircompletes a cycle of such eclipses in less than three days. The variability inbrightness was discovered by an Italian astronomer in 1667, and was finallyunderstood as an eclipsingbinary in 1889.

The newly discovered magnetic loop helps explain phenomena seen in earlierobservations of the Algol system at X-ray and radio wavelengths, the scientistssaid. In addition, they now think there
may be similar magnetic features in other double-star systems.

Peterson and team reported their findings in the Jan. 14 issue of the journalNature.