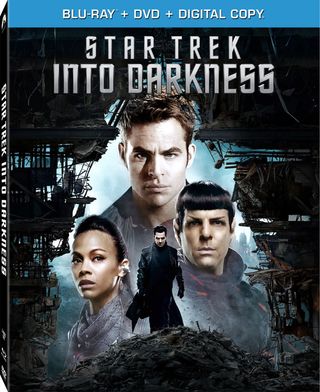 Set your TV remotes to stun, the "Star Trek Into Darkness" Blu-ray will hit store shelves at warp speed on Tuesday (Sept. 10) and includes some fun glimpses into exactly how J.J. Abrams is reinventing a decades-old science fiction franchise.

In "Star Trek Into Darkness," director J.J. Abrams returns to his reboot Trek universe to put James T. Kirk (Chris Pine) back in the captain's chair of the Starship Enterprise to face off against his most challenging foe yet (spoiler alert): the thawed-out superman that is Khan (Benedict Cumberbatch), a fan-favorite villain originally portrayed by Ricardo Montalban on Trek's original TV series and second feature film ("Star Trek II: The Wrath of Khan"). The 2013 summer film is the sequel to Abrams' 2009 "Star Trek," which launched Kirk, Spock and the rest of the Enterprise crew into an alternate timeline with an all-new cast.

The timing of the Blue-ray is impeccable: The 47th anniversary of Star Trek was, after all, on Sunday (Sept. 8).  [See photos from "Star Trek Into Darkness"]

On Blu-ray, "Star Trek Into Darkness" pops with its electric colors and Abrams' trademark lens flares. The Enterprise's sleek lines and interior, in particular, stand out, as does the bright red planet Nibiru (no, not THAT Nibiru) which is a lush world of red-and-white trees that is home to a nascent population of humanoids. It's also home to a giant killer volcano, which the Enterprise crew would like to stop, of course.

The planet and its stunning volcano scene star in one of seven featurettes included on the "Into Darkness," Blu-ray, to explain exactly how Spock (Zachary Quinto) saves the day. "I feel like I'm inside a fireworks show," a spacesuit-clad Quinto explains at one point.

In all, there are about 42 minutes of special features packed into the basic "Into Darkness" Blu-ray combo pack, which comes with a DVD disc and Ultraviolet and digital download versions. The other featurettes include glimpses into some key battle scenes, as well as a look at the evolution of Cumberbatch's Khan.

Abrams, himself, initially wavered on using Khan in his "Star Trek" sequel (which mirrors the 1982 "Wrath of Khan" in key ways) precisely because it had been done before.

"The truth is, no one really resonates like Khan," Abrams says in the Khan featurette.

Abrams' take on the Klingons, a warrior alien race that dates back to the franchise's original series, also gets a close look. It turns out, you can use 3-D printing to test Klingon makeup, but you'll have to watch the Blu-Ray to see how they do it.

"It's like Sports Illustrated for Klingons," says Zoe Saldana, who portrays the Enterprise's multilingual communications officer Lt. Uhura, with a smile as the film's Klingon characters line up. "They look so handsome."

Saldana gets a chance to show off her language skills with some impressively fast Klingon speaking, but then again she did learn the entire alien language of the Na'vi in James Cameron's "Pandora."

While the Blu-ray special features are entertaining, a director's commentary by Abrams is noticeably absent.

You'll likely find it on iTunes, as it is one of several key special features reserved for retailers. Target stores, for example, are advertising exclusive content not found on other versions of "Into Darkness," while others can be found on the Best Buy/CinemaNow version, according to several reports by Trek-tracking fans.

One can only hope that there's a super-mega-ultra special edition in the works that will pack them all into one place in time for Christmas.