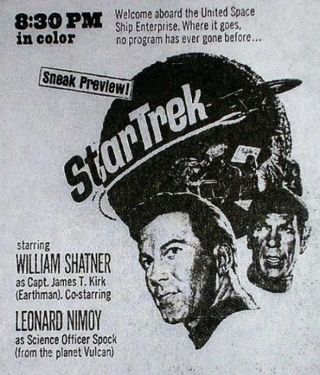 Forty-seven years ago today, a science fiction icon was born that would live long, and definitely prosper. I'm talking, of course, about the original TV series of "Star Trek," which launched the U.S.S. Enterprise into deep space (and our hearts) on Sept. 8, 1966 and that starship has been boldly going ever since.

Today, the "Star Trek" sci-fi franchise has spawned four spinoff series, an animated TV show and — as of this summer — 12 feature films, with the promise of more to come. So why do we love "Star Trek" so much? Why do we watch the crew of the Starship Enterprise, its brash and bold Captain James T. Kirk, half-Vulcan half-human First Officer Spock and their crew save the universe time after time? Even now, it's hard to pin down, but the series' vision of a far-distant future in which humanity has reached a global peace in order to expand into the stars has always been a major draw for me. Its sense of exploration, of pushing beyond the "final frontier," resonates even today. And let's be honest, who doesn't want warp drive and transporters and tricorders? At least we have handheld "communicators" (think cell phones). [Evolution of the U.S.S. Enterprise in Photos]